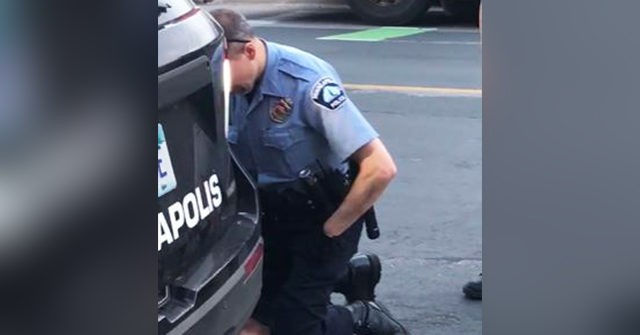 A graphic video posted on Facebook showed a white Minneapolis cop kneeling on the neck of a black man while making an arrest, with the black man pleading that he could not breathe.

The man in custody, who was later identified as George Floyd by prominent civil rights attorney Ben Crump, later died after he was taken to a local medical center, CBS News reported.

KMOV reported that Floyd’s death, which occurred Monday night, is now being investigated by the FBI and state agents as of Tuesday.

Four of the officers involved in the arrest and Floyd’s death were fired Tuesday, hours after the graphic Facebook video went viral and provoked widespread outrage among those on the Internet.

Officers were called around 8 p.m. Monday to respond to a report of a forgery at a business, a police spokesperson said. Police discovered the man, believed to be in his 40s, and noted that he matched the suspect’s description in his vehicle.

“He was ordered to step away from his car. After he got out, he physically resisted officers,” police spokesperson John Elder said in a statement. “Officers were able to get the suspect into handcuffs and noted he appeared to be suffering medical distress.”

Crump, who says he had been representing Floyd’s family, has also represented the father of Ahmaud Arbery, who had been killed February 23 in Georgia after a white father and son team had pursued him, a 25-year-old black man. Crump’s other clients include Trayvon Martin’s family and Michael Brown’s family.

“We all watched the horrific death of George Floyd on video as witnesses begged the police officer to take him into the police car and get off his neck,” Crump said in a statement. “This abusive, excessive and inhumane use of force cost the life of a man who was being detained by the police for questioning about a non-violent charge.”