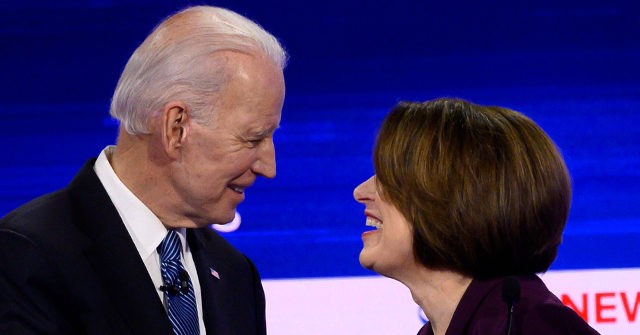 Two women reportedly on Joe Biden’s shortlist for vice president have been hit with major scandals that could cripple their chances of being nominated.

According to Mint Press News, between 1999 and 2007, Klobuchar “did not bring charges against more than two dozen officers who had killed citizens while on duty – including against Chauvin himself.”

Chauvin was involved in a fatal accident in 2005, killed Wayne Reyes in 2006, shot another man while in uniform in 2008, and had a litany of complaints against him. To be fair to Klobuchar, the Reyes shooting happened in October 2006, as her time as state prosecutor was coming to an end and she was campaigning for the senate. By the time Chauvin’s case finally made it to a grand jury, she had relinquished her role.

The site reported Klobuchar “declined” to bring charges against the officer who was filmed putting his knee on the neck of George Floyd on Monday, allegedly causing his death.

The news site claimed Minneapolis had a “history of racist policing, thanks to Klobuchar.”

Meanwhile, in Michigan, Gov. Gretchen Whitmer has suffered a series of scandals, most recently her husband’s attempt to use his wife’s stature to get his boat in the water before other residents.

Whitmer at first denied the story, then claimed it was a “failed attempt at humor” on her husband’s part, before demanding an apology from Senate Majority Leader Mike Shirkey after he said she “lied” about the situation.

“My husband made a failed attempt at humor last week when checking with the small business that helps with our boat and dock up north,” Whitmer said.

“Knowing it wouldn’t make a difference, he jokingly asked if being married to me might move him up in the queue,” she said.

“Obviously with the motorized boating prohibition in our early days of COVID-19, he thought it might get a laugh. It didn’t,” Whitmer continued.

“And to be honest, I wasn’t laughing either when it was relayed to me, because I knew how it would be perceived. He regrets it. I wish it wouldn’t have happened, and that’s really all we have to say about it,” she said.

“It would be nice if this governor was as quick to identify failed leadership. How can we trust the governor, how can the citizens of Michigan trust the governor? What else is she willing to lie about if she lied about putting a boat into the water?” Shirkey said.

On Thursday, Whitmer attempted to shift away from the scandal and called on Shirkey and the legislature to work with her to address an estimated $3 billion budget shortfall created by her shutdown of the state.

In another blow to Biden’s pool of prospects, U.S. Sen. Catherine Cortez Masto (D-NV) said she’s “not interested” in running with him, the AP reported.

“I support Joe Biden 100% and will work tirelessly to help get him elected this November. It is an honor to be considered as a potential running mate but I have decided to withdraw my name from consideration,” Cortez Masto said.