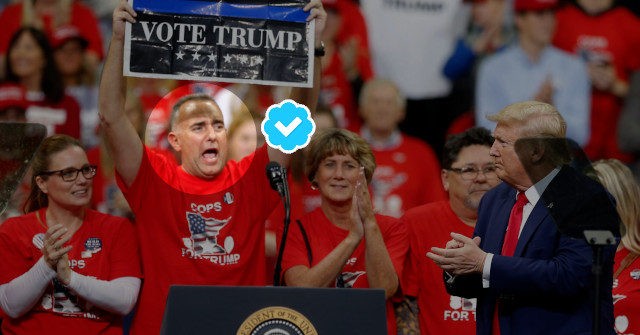 Minneapolis Police Union President Lt. Bob Kroll confirmed on Wednesday that Derek Chauvin — the officer caught on tape resting his full weight on Minnesota man George Floyd’s neck shortly before he died — was not on stage at an October campaign rally held by President Donald Trump.

Despite Twitter’s new approach to “fact-checking” their content, false claims that Chauvin was on stage at a Trump rally went viral and have not been moderated by the platform at the time of this writing. Minneapolis Police Union President Lieutenant Bob Kroll verified that the officer pictured was not Chauvin.

Twitter has, and continues to, allow the content to circulate its platform — even by verified users. Despite their new commitment to verifying information, there is no “get the facts” link on the tweets, as has been famously applied to President Donald Trump. They were significantly slower to do the same to China.

Is that Derek Chauvin, the ex-Minneapolis cop who choked #GeorgeFloyd to death on video in the front row of a Trump MAGA rally?

Is that the man who killed #GeorgeFloyd laughing three feet from @realDonaldTrump?

Fiction author Don Winslow’s message does not yet feature a “get the facts” label, despite being highlighted in a fact check by the far-left website Snopes. Though Winslow frames the identification as a question, he has not deleted the misleading post even after fact-checkers have given a definitive answer.

This is not the first time a misleading picture about Chauvin has circulated on Twitter. On Wednesday, an allegedly doctored photo of Jonathan Lee Riches in a red “Make Whites Great Again” baseball cap was spread by verified profiles, labeled as a picture of Chauvin. Twitter ultimately added a “Manipulated Media” label to those posts — but only after a Breitbart report highlighting its inaction.

The May 26 death of George Floyd in front of a crowd of bystanders has sparked escalating protests in Minneapolis, as well as national bipartisan outrage. Officer Chauvin, accompanied by three other members of law enforcement, knelt on Floyd’s neck as he begged for his life, telling them, “I can’t breathe.”

Hours after the video went viral, Minneapolis Mayor Jacob Frey announced the firings of four Minneapolis Police Department officers. “This is the right call,” Frey wrote on Twitter. “Being black in America should not be a death sentence,” he said. “For 5 minutes we watched as a white officer pressed his knee to the neck of a black man, for 5 minutes. When you hear someone calling for help, you are supposed to help, this officer failed in the most basic human sense.”

Regardless of these errors, the country at large is furious over the public killing of an unarmed civilian by the Minneapolis police. “I hope these cops are dealt with good and hard,” Rush Limbaugh said yesterday. “I can’t… I’ve seen the video like everybody else, and it makes me so mad I can’t see straight.”

Demonstrations have given over to open rioting in Minneapolis, endangering other citizens and drawing criticism even from former NAACP St. Paul president Diane Binns. “I watched what they were livestreaming on video last night,” Binns said.

“…And the destruction they did to their own communities. What are people going to do who live in those communities?” she asked. “They need those resources. We don’t have many stores as it is. So why are we going to burn down the small business owners who are there for us?”