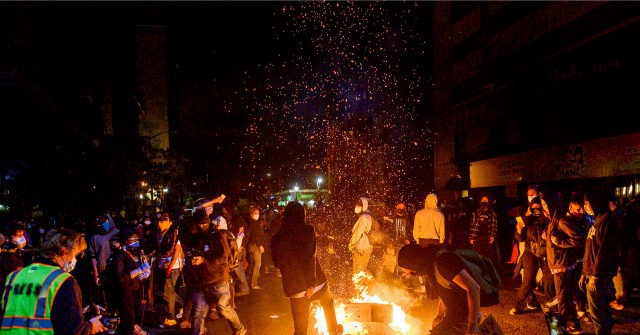 “I think the FBI has to investigate, especially this time, [when] you have enormous coordination between what’s going on in Minneapolis, then L.A., Houston, Atlanta,” Kerik determined. “There’s a bunch of coordination going on.”

Kerik added, “These pop-up riots, where they’re destroying businesses and cars and everything else, who’s paying? When these Antifa people get locked up, who pays their bail? Who gets them out of jail? How did they get there in the first place? Who pays for their communication networks?”

“The FBI should investigate to see who’s doing this,” advised Kerik. “Who’s behind these groups? Because when you look up the definition of terrorism — threats, intimidation, and extreme violence or violence for political reasons — that’s what these people are doing.”

Kerik added, “These aren’t protesters. These people are paid radical left-wing anarchists that come to instigate and engage in extreme violence, arson, and looting”:

Mr. President @realDonaldTrump… Local, state and federal law enforcement agencies should be investigating who they are, where they came from, who is paying them, as well as looking into their communications networks and who they’re organizing with. https://t.co/M10AOO4ERF

“When you look at some of these people that were in Minneapolis last night, for example, some of the leaders in the group were young white men all dressed up in black with military-grade radio communications, who were central command posts with earpieces,” observed Kerik.

This is not community unrest or civil disobedience. This is terrorism and the organizers and instigators must be investigated and charged federally. #Antifa #BLM https://t.co/ihofhZD3H1

“When are we going to treat these people as [the] domestic terrorists they are?” asked Kerik, “because that’s what they are. This is terrorism. This isn’t civil disobedience.”

Kerik is the author of The Grave Above the Grave.