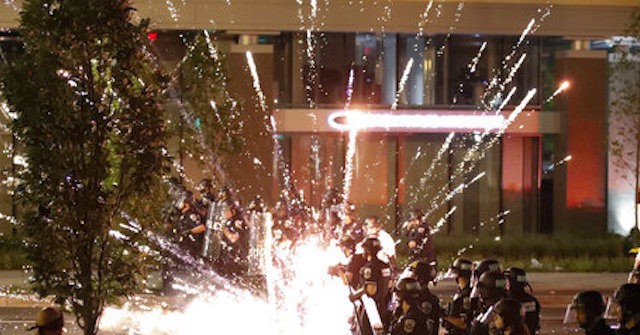 Tear gas just fired at protestors outside The White House. Lots of people gasping for breath & unable to see. pic.twitter.com/wyDmzcw1HG

Reporters on the scene said that protesters continued to tear down temporary barricades at the White House while throwing fireworks, bottles, and rocks.

Despite Trump floating the notion of his MAGA supporters gathering at the White House on Saturday night, there were no reports of a visible presence of Trump-affiliated supporters on the scene.

Maine One flew over the crowds as the president returned to the White House after watching a NASA/SpaceX manned rocket launch in Florida on Saturday afternoon.

Trump, in Marine One, just did a flyover of the protest area outside the White House.

The latest of many scuffles outside White House #dcprotest

Pepper spray has many of us coughing pic.twitter.com/wEiemZ05zR

Unlike Friday night, where protesters struggled with Secret Service on Pennsylvania Avenue, officials closed off Lafayette Park keeping protesters far away from the White House complex. Officials were much more aggressive in warding off protesters from the area.

Insanity outside the White House. Three warnings of an unlawful assembly from the Secret Service before storming into the crowd.

A lot of people have been hit with paper spray. In all the chaos, at least one person was tossed to the ground and presumably arrested. pic.twitter.com/Ab2eSkq9CS

Pictures on social media showed dumpsters near the White House set on fire.

Getting real tense here in front of the White House.

People charged the barricade and grabbed it / tore it down. Cops fired a round of rubber bullets and deployed tear gas at protesters attempting to get past the fence. #dcprotests pic.twitter.com/oh7BJEhOKS

Protesters have pulled down fencing to stand face to face with police near White House. Fireworks have been thrown at police, along with some rocks, and a couple dumpsters have been set afire. A teargas canister was fired by police then lobbed back #DCProtest #GeorgeFloydProtests

One reporter said on Twitter that she was shot twice by rubber bullets.

I was shot twice tonight by rubber bullets while reporting in front of the White House. Just one of the strategies police are using to keep protestors from breaking through the barricades. #GeorgeFloydProtests pic.twitter.com/JQtXF1e0Ku

Somewhat tense moment at 16th and K. Large group of protesters walked up to police line, looked like some may’ve tried to push past them. Police used pepper spray to get most of crowd to disperse. This is 2 blocks from White House. pic.twitter.com/shvCBJCy0m

The DC National Guard issued a statement noting that they had been activated to assist U.S. Park Police to maintain order near the White House. Military vehicles were spotted traveling to the area.

Protestors chant “fuck Donald Trump” across from the White House.#BLACK_LIVES_MATTERpic.twitter.com/TjjMVQ0JK2

Current scene outside of the White House pic.twitter.com/wiY7hCdoNW

Fires in garbage bins. This is the scene outside the White House now. There have been a number of intense exchanges. Tear gas from police. Flares from protestors. Some protestors tell me the police threw them first, and they were throwing them back. pic.twitter.com/3jExBbfupt