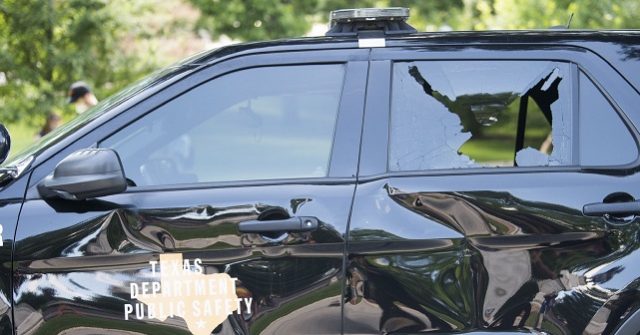 Protesters at the Texas Capitol in Austin turned violent on Saturday, overturning one Department of Public Safety vehicle and vandalizing another. The protesters also destroyed property on the grounds of the state’s capitol building.

During a protest that lasted several hours, George Floyd protesters turned violent and began vandalizing property. The protesters overturned a Texas Department of Public Safety vehicle on the Capitol grounds and vandalized another DPS SUV by throwing a rock through a window and bashing the side of the vehicle, according to a tweet by KVUE reporter Bryce Newberry.

Here’s a look at what we’ve seen from APD HQ to the State Capitol in #Austin as protesters start their 5th hour taking their message to the streets #GeogeFloyd #MikeRamos #austinprotest
: John Gusky / @KVUE pic.twitter.com/YnmK4rJFCz

Newberry also reported that their photographer witnessed “a mob of people attacking” a DPS trooper at the State Capitol.

A few minutes later, protesters attacked another DPS trooper vehicle parked outside the Texas Governor’s Mansion. The windows of the vehicle appear to be smashed out.

Twitter user Robert @rbrt987 observed what he believed to be the same person vandalizing property on the State Capitol grounds and elsewhere in the city.

Same kid seen vandalizing two sites in Austin, TX. Who is he? Who are these people? Who are they working for? @realDonaldTrump @Austin_Police #antifaterrorists #austinprotest pic.twitter.com/wsjRMZ4ges

Further south, protesters gathered in large numbers around the headquarters of the Austin Police Department. The protesters marched from the Capitol to the police headquarters and then piled onto the neighboring Interstate 35 Highway.

Fox7 reporter Bridget Spencer tweeted that Austin police officers used pepper spray and rubber bullets to control some of the protesters gathered around the headquarters building.

Warning, language: At APD HQ, officers use pepper spray and what appear to be rubber bullets to control some protesters. @fox7austin pic.twitter.com/eseQixk7l4

Another Twitter post shows people giving aid to protesters who have been sprayed with pepper spray and shot with rubber bullets.

To help control violent protests around the states, Texas Governor Greg Abbott ordered the deployment of 1,500 DPS troopers to the state’s major cities.

“Texas and America mourn the senseless loss of George Floyd and the actions that led to his death are reprehensible and should be condemned in the strongest terms possible,” Governor Abbott said in a written statement. “As Texans exercise their 1st Amendment rights, it is imperative that order is maintained and private property is protected.”