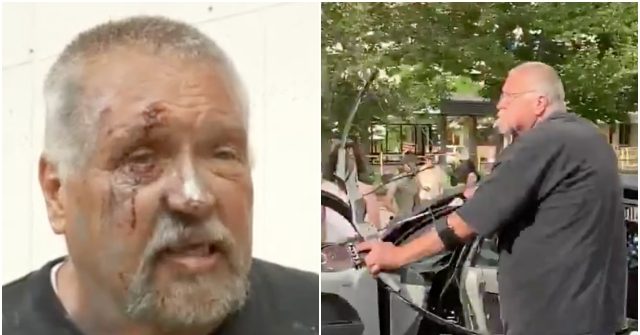 Rioters in Salt Lake City, Utah, beat a man, flipped his car, and lit it on fire after he confronted them with a bow and arrow during riots on Saturday evening.

Brandon McCormick, an ex-felon who said he chanted “all lives matter” in Salt Lake City, can be seen on video footage posted online getting beaten up and having his car destroyed after he shot his bow and arrow at rioters.

“My car got totaled … my phone, everything. I lost everything,” McCormick told FOX 13 News.

A civilian brought a hunting bow to the #slcprotest and began shooting it at protesters. pic.twitter.com/UYZFtISb9I

sorry i had to trim. there is more.
VIDEO CREDIT: @jaxcino on LIVE IG #slcprotest #blacklivesmatter #saltlakecity pic.twitter.com/cRdovtrHWc

McCormick said he arrived at the riot to “back up the law enforcement” and protect them.

“I know some cops are bad. I know some people of all races are bad,” McCormick told local media.

Rioters in Salt Lake City, protesting over the death of George Floyd who died in police custody, flipped a car over earlier in the day.

Breitbart News is live-blogging the riots across American cities this weekend here.