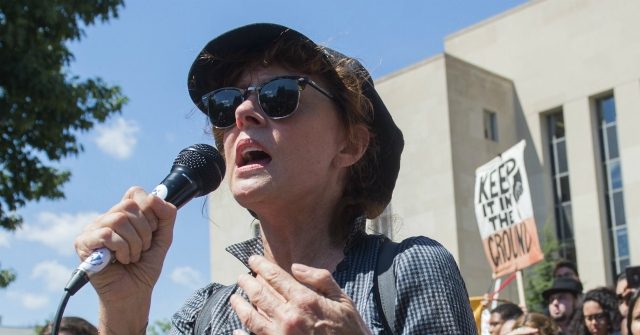 Actress Susan Sarandon is among a growing number of Hollywood and entertainment figures who are promoting an effort to defund of police forces even as rioters continue to lay siege to major cities around the country by setting fires and destroying private and public property.

The demands to defund the police gained momentum on Twitter on Sunday as celebrities and other influencers began amplifying the call to their thousands of followers. The hashtags have also been promoted by Black Lives Matter and Rep. Rashida Tlaib (D-MI).

Susan Sarandon is the most prominent celebrity so far to call for defunding police forces, echoing a similar demand by the Sunrise Movement, a far-left climate-change activist group.

Model and actress Emily Ratajkowski tweeted #DefundPolice with a photo of herself participating in the Los Angeles protests on Saturday.

Patrisse Cullors, who is a co-founder of Black Lives Matter and who also works as an actress and a writer on the Freeform series Good Trouble, is also calling for the defunding of police.

Direct action gets the goods

Kendrick Sampson, who stars in HBO’s Insecure, has repeatedly called for defunding the police after he claimed he was hit by rubber bullets and batons when he joined rioters in L.A. on Saturday. In one tweet, he compared police work to “slave catching.”

Appreciate the outpouring of support & standing with us but if y’all really want to support, make sure we do EVERYTHING in our POWER to #DEFUNDPOLICE – END THE LEGACY OF SLAVE CATCHING and use those resources, OUR RESOURCES to build BETTER. Make THAT the headlines. Put in WORK.

The music group Brasstracks demanded the defunding of the New York Police Department.