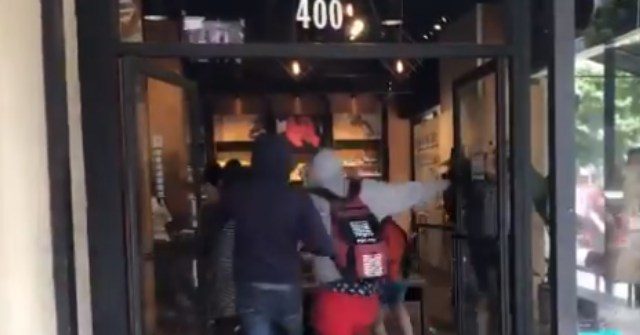 Looters struck high-end retailers in Santa Monica, California on Sunday afternoon, as protests of the death of George Floyd continued.

Local reporters on the scene noted mostly peaceful protests in Santa Monica, California, on Sunday afternoon but that a separate contingent of looters soon organized.

Here’s what happened in Santa Monica. I was at a very peaceful protest/march down Montana just 20 minutes ago that had zero issues. At some point, a separate crowd of scumbags formed and have decided to go hit the Promenade area and loot it. @FOXLA

The looters struck Santa Monica Place, a high-end mall that is the centerpiece of Santa Monica’s oceanside business district and the highlight of the popular Third Street Promenade.

BREAKING: Santa Monica Place now being looted in broad daylight at the end of the 3rd Street Promenade. @FOXLA pic.twitter.com/bOQ3cLbi1x

A Vans shoe store was also reportedly looted, as Fox 11 News showed people walking out with armloads of shoe boxes.

Heavily armed police vehicles responded to the area, including an armored vehicle, as groups of masked individuals ran into the streets and entered other retail stores.

WATCH LIVE: There appears to be some looting taking place in Santa Monica, where peaceful protesters had gathered earlier today. https://t.co/hDEiXBqPyY pic.twitter.com/WxeBCVH22A

One local reporter said that looters returned to the Vans store after the National Guard left.

Santa Monica officials leveled a 4:00 p.m. curfew to try to stem the violence in the streets.

The City of Santa Monica will join our neighboring cities in extending our curfew to tonight, May 31, 2020 at 4 p.m. through tomorrow, Monday, June 1 at 5:30 a.m. More info: https://t.co/wUmFGbO511 pic.twitter.com/Dxh1OhtgRJ

A masked man clothed in black tried to break into the REI store and shoved a woman who was standing in front of the store with an “end all violence” sign. In response a man stood up to the looter and told him to leave, warning that he was carrying a gun.

The man left the area.

One of the protesters who stopped the looting says the looted threatened to pull a gun on him. He told the looter he was conceal carrying and the guy left.
“This is about George Floyd, not selfish games, these local businesses have nothing to do with it,” he says. @FOXLA pic.twitter.com/rNrOBI38e6