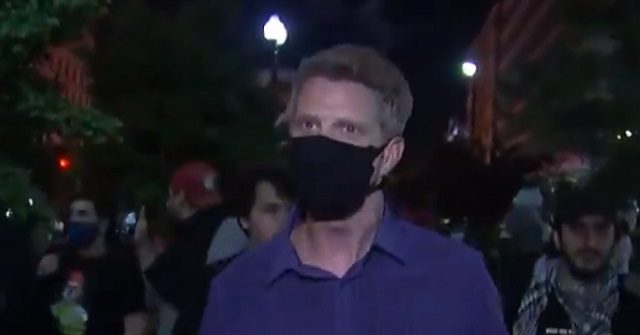 According to Haake, the protesters were still “peaceful.”

“If the president’s watching, I’m looking at his house right now, and there’s nothing fake about this,” he said. “This storage facility we’ve been looking at all night that’s completely engulfed now, I think, is the reason that the Park Police cleared us out here. They wanted to get fire engines down this block to try to address that. But those DCFD engines have moved on. Don’t know whether it was a lack of access to water, or they didn’t feel safe enough even in that situation here. And in the meantime, the Park Police have pushed us back yet again, including giving my photographer and I a little bit of a boost getting out of the area here as they try to create a little bit more space.”

“But I want to direct you to this because this is what this is really all about,” Haake continued. “This is still peaceful protesters trying to come out here and express their anger, their frustration, their exhaustion, with what has gone on in this country when it comes to police brutality and police violence. These people are trying to do this peacefully. They’ve been trying to self-police — the folks who have been here throwing rocks and bottles and fireworks so that they can deliver this message to this exact audience, to this audience — these police officers, to the man who lives in the house temporarily down the street, they’re trying to make a very clear point right now. And in the face of all this, now with most of the crowd gone, with most of the bottle-throwing, the rock-throwing, the pepper-spraying done, they’re doing exactly that.”

Shortly after making those remarks, Haake was apparently hit by a rubber bullet, caught between protesters and police.