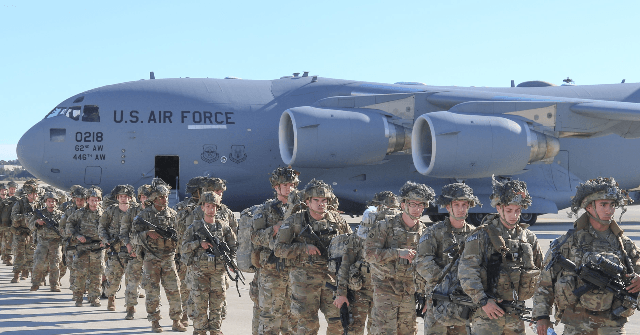 The Pentagon has ordered the 82nd Airborne Division’s Immediate Response Force to deploy to the D.C.-area amid rioting across the nation, according to multiple sources on background.

The force is the same one that deployed earlier this year to quell violent Iran-backed protests in Iraq. Sources told Breitbart News earlier on Monday that the forces were preparing their gear to deploy, but Pentagon officials would not confirm.

A source also told Breitbart News that the 16th Military Police Brigade from Fort Bragg was also headed to D.C.

The deployments to D.C. comes after rioters looted stores, defaced national monuments, and burned a historic church a block from the White House.

Trump during a press conference on Monday announced he was dispatching military units in response to the riots.

“My first and highest duty as president is to defend our great country and the American people. I swore an oath to uphold the laws of our nation, and that is exactly what I will do,” he said.

“As we speak, I am dispatching thousands and thousands of heavily-armed soldiers, military personnel, and law enforcement officers to stop the rioting, looting, vandalism, assaults and the wanton destruction of property,” he added.

Trump also spoke to governors earlier during a conference call in which he urged them to show strength and take back the streets from rioters.

He added: “And, if necessary, the 10th Mountain, 82nd Airborne, 1st Cav, 3rd Infantry — whatever it takes to restore order. No quarter for insurrectionists, anarchists, rioters, and looters.”

And, if necessary, the 10th Mountain, 82nd Airborne, 1st Cav, 3rd Infantry—whatever it takes to restore order. No quarter for insurrectionists, anarchists, rioters, and looters. https://t.co/OnNJmnDrYM