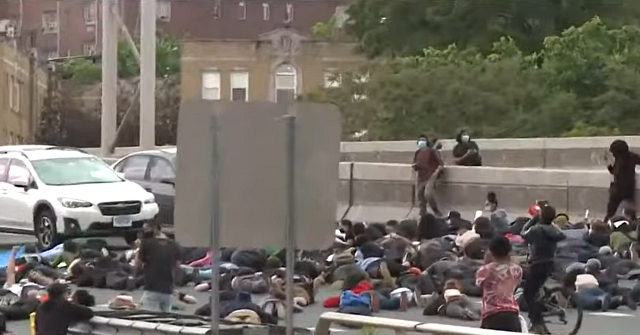 Police in Connecticut showed support for protesters of the death of George Floyd by taking a knee and condemning the violent actions that took his life.

Protesters in Hartford, Connecticut, took over part of Interstate 84 Monday evening as some were even lying down on the roadway in a protest of the death of Floyd in Minnesota.

Connecticut State Police showed support for the protesters as troopers knelt along with them.

Protestors share a emotional moment with State Police on I84 as they closed down the highway during today’s protest. pic.twitter.com/CejUYFR44I

The protesters left the road at about 6:30 p.m. and traffic continued.

Hartford Police Chief Jason Thody and two deputy chiefs drew a cheer from the crowd of peaceful protesters outside the police station as they also knelt with them to show support and denounce the actions that led to Floyd’s death in Minnesota.

@HartfordPolice Chief kneels with peaceful protestors outside the Hartford Police Station to show solidarity and condemn what happened to #GeorgeFloyd in Minneapolis. pic.twitter.com/XKiHXG52E6

“Seeing that video was heartbreaking and it was appalling,” Thody told WTNH. “Every interaction that we have with every citizen either furthers the trust or degrades it.”

Keith Mello, president of the Connecticut Police Chiefs Association, released a statement Thursday in which he described the images on the video as “beyond disturbing” and ones that “cast a stain over the law enforcement profession and the dedicated men and women who strive to protect and serve their communities with honor.”

“Every person deserves to be treated with dignity and respect, this is the foundation of our profession,” Mello added. “Any violation of these core tenets is inexcusable.”