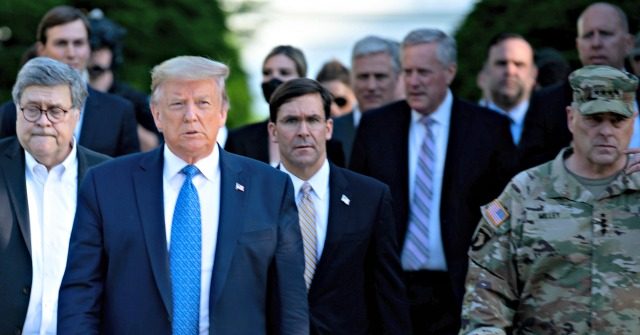 Prominent leftists on Monday raged over President Trump’s walk to St. John’s Episcopal Church after authorities cleared out protesters in the area around Lafayette Park, accusing the president of having demonstrators “viciously attacked” for a “photo op” and deeming him a “fascist.”

The president concluded his Rose Garden address by announcing his intention to “pay my respects to a very, very special place.” From there, Trump departed, walking to the historic church that rioters targeted on Sunday night.

Authorities cleared out protesters ahead of Democrat Mayor Muriel Bowser’s 7:00 p.m. curfew and Trump’s walk to the church.

Philip Wegmann, White House Correspondent for RealClearPolitics, indicated that protesters were “warned 3 times over loud speaker by park service and police to clear the area,” citing a source with “direct knowledge” of the events.

Nonetheless, enraged progressives took to social media to express outrage over both the president’s speech — vowing to assume command in the event that governors fail to subdue violent rioters — and his subsequent action, holding up a Bible in front of the historic church alongside members of his staff.

“The President of the United States tear-gassed peaceful protestors in order to clear the way for a useless photo-op outside the White House—just after vowing to activate the military against our own people,” Sen. Elizabeth Warren (D-MA) raged:

The President of the United States tear-gassed peaceful protestors in order to clear the way for a useless photo-op outside the White House—just after vowing to activate the military against our own people.

Lives and our democracy are in danger.

For our children, for the very soul of our country, we must defeat him. But I mean it when I say this: we can only do it together. https://t.co/G1yE67q9Nz

“Tonight the President of the United States used the American military to shoot peaceful protestors with rubber bullets & tear gas them. For a photo op,” she declared.

“This is a horrifying use of presidential power against our own citizens, & has no place anywhere, let alone in America. Vote,” she pleaded:

Tonight the President of the United States used the American military to shoot peaceful protestors with rubber bullets & tear gas them.

For a photo op.

This is a horrifying use of presidential power against our own citizens, & has no place anywhere, let alone in America. Vote.

“I don’t know anyone in ‘Antifa.’ But I’m against facism [sic]. And @realDonaldTrump is a fascist,” Rep. Eric Swalwell (D-CA), a prominent Trump critic, asserted:

I don’t know anyone in “Antifa.” But I’m against facism. And @realDonaldTrump is a fascist.

Did we just get Martial Lawed??! So, he just Declared War on The Public??!! It’s not 1807 this is not Rebellion!!, but I think it’s about get all kinds of fucked up here!!

Tear-gassing peaceful protestors without provocation just so that the President could pose for photos outside a church dishonors every value that faith teaches us.

And who, exactly, is going to stop him? The Senate? Mitch McConnell? Bill Barr??? The police who have been brutalizing protesters and journalists around the country? The military police who just fired tear gas on peaceful protesters? Genuine question. https://t.co/wxKxcJqTc4

I think it might have more to do with the fact that peaceful protesters just had rubber bullets and teargas shot at them so the President could have that photo op, but you do you. https://t.co/0X0MjfkSj9

The President had peaceful protesters shot with tear gas and rubber bullets so he could get his picture taken.

Powerful comment: Bishop Marian Budde of the Episcopal Diocese of DC says she is outraged that @realDonaldTrump used StJohn’s (without asking them) as a backdrop for his photo op after clearing protesters “what we are witnessing now is the shredding of our national fabric” @CNN

The Fake Christian Donald Trump turned a church into a photo op and held a bible up as he fired tear gas at peaceful protesters.

He is mentally unfit for office and must be voted out in November.

Please do your part to ensure the worst President in history is removed.

1000% And some of her detractors deserve more middle fingers than others. https://t.co/PMedUhQ8Cj

Look what happened when Trump’s gestapo was attacking civilians. https://t.co/okSPqC29AC

The President is a clear, imminent danger to our way of life.

We have never been closer to a dictatorship.

A real leader would go our and listen to the protestors. They are peaceful protest outside the WH. But Trump is a coward.

Bishop Mariann Edgar Budde, who oversees the church, said she is “outraged” to see it used in a photo-op.

After using flash-grenades, rubber bullets, and tear gas to attack Americans peacefully protesting, the President took up a Bible as though he’d never seen or touched it in his life and posed before a church. As a Christian, I denounce him and his behavior.

As Breitbart News reported, the widespread depiction of “peaceful protests” has been largely inaccurate, as many protests have been dominated by looting, fires, and violence against officers:

Over the past three days, rioters outside the White House have violently clashed with Secret Service officers, torn down barricades, assaulted journalists (including Breitbart News reporter Matthew Perdie), vandalized historic buildings and monuments, and lit multiple fires, including one that caused damage to the historic St. John’s Episcopal Church, opposite the White House.

Such chaos is what seemingly drove the president to visit St. John’s Episcopal Church on Monday evening.