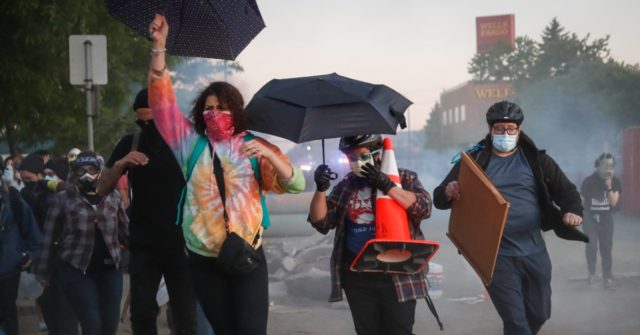 What do all those American cities have in common?

What’s more, these riots are not America’s problem….

These riots are not President Trump’s problem…

Nope, these riots are wholly owned by the Democrat Party and the fools who continue to vote for them.

With Keith Ellison you get Antifa, and when you’re stupid enough to vote for a Louis Farrakhan-hugging, Antifa-embracing radical like Keith Ellison to be your attorney general, your state’s top law enforcement officer… Enjoy the bed you made.

You voted for Keith Ellison and now Antifa burnt down your job. Huh? How about that?

I’m not happy about these riots. Of course not. The feeling is more along the lines of overwhelming indifference with a side of TOLDJASO. I’m not proud of the TOLDJASO part, but I’m also not going to lie about it.

And when Antifa attacked CNNLOL’s headquarters in Atlanta, I was reminded of something CNN staffer Chris Cuomo once said about Antifa: “[F]ighting hate is right. And in a clash between hate and those who oppose it, those who oppose it are on the side of right.”

Power to the people!

Let me put it this way…

And God did grant me that serenity safe in the knowledge I can’t fix stupid, and people who vote for Democrats are stupid, and I’ve spent 16 years and countless hours on these here InterWebDotNets warning you about Democrats, so my conscience is now clean with the serenity of indifference.

Yes, the Republican Party sucks. But it’s a binary choice and if you’re not stupid, you’ll always go with the pro-gun, anti-Antifa sucky party.

And we did tell you so… We did. For decades, we’ve been warning you about the increased radicalization of the Democrat Party, a radicalization that started right here and has not only openly embraced left-wing terrorists groups like Antifa, but has bred these monsters.

After all, what is Antifa if not the unholy spawn of a Democrat Party and its nihilistic, left-wing religion that preaches you into the spiritual void of loveless sex, massive tuition debt, hating America, despising free enterprise, smoking weed, and the sacrament of killing the unborn. By Democrat design, the marauders in Black Lives Matter and Antifa have no stake in America — their womyn studies degree ensures they have no job, no future, no family, and $150,000 in debt. Hell, why not riot?

Antifa burns down your backyard and gets great press. So why not riot?

And of course Antifa and its unholy brethren of anarchist groups are going to target your Democrat-run city for a night of the ol’ ultra-violence…Where else are they going to riot? First off, monsters always seek to kill their creators. But there is also the reality of the logistics of the situation: Antifa knows Democrats are cucks who will allow them to riot. Antifa knows Democrat-run cities have gun control laws that ensure you remain defenseless.

Out here in the sticks — you know, Rural America, that place you oh-so sophisticated Blue State Dwellers call the hinterlands, it was — no joke — the most beautiful weekend of the year. It was just perfect, and everyone in my neighborhood mowed their lawns and grilled meat while the kids rode bikes… I topped my Saturday night with a good book and a Pabst Blue Ribbon tallboy on the porch followed by a Western on my 60-inch plasma. I then went to bed with the windows open so my wife and I could fall asleep to the sound of crickets and the smell of freshly cut grass. And I did it all again on Sunday (except I watched a war movie instead of a Western)…

Now, I’m no idiot. There are always two loaded firearms within reach of my bed. But that’s about preparation, not fear, and if Antifa (or anyone) is ever stupid enough to move their marauding to my neck of the woods, all they’re going to discover are alert dogs, security lights, and patriots who believe in the Second Amendment.

But Antifa knows that, which is why they don’t come here…

Antifa’s not stupid. You are.

Yes, a couple Republican-run cities saw some violent protests, but those are exceptions that prove a rule that ensured Antifa would burn dozens — dozens — of Democrat-run cities. It was inevitable, it was predictable, and you voted for it, and we toldjaso.

Let me ask you… How did it feel the other night when the same Democrat-led (for 48 years) Minneapolis police department that did what it did to George Floyd abandoned you… Did you feel like you were owning the Orange Bad Man?

Let me ask you… While you were cowering in a home lit only by the nearby fires… As you cradled your family and inhaled smoke coming from your job burning down… As you prayed to Gaia that no one would come because you had no way to defend yourself…  Did you feel like you were owning the NRA?

Last question… As you were sitting terrified at home watching Antifa screamed “Fuck Trump” and burn your neighborhood down on CNNLOL while CNNLOL spread the lie that blamed the violence on the Russians and white supremacists… Did you feel like you were owning Fox News?

And I’m sorry you’re stupid, I really am.

But what you get what you vote for, and you voted for this….