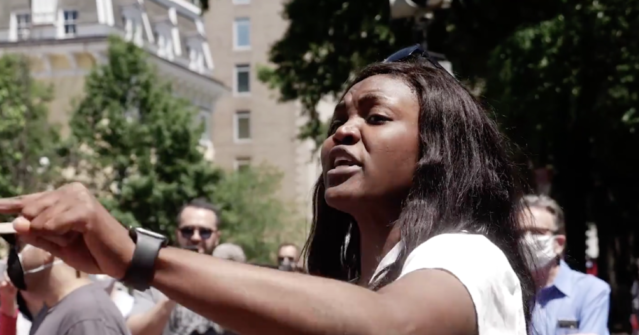 A D.C. resident confronted Black Lives Matter (BLM) protesters at a demonstration over the death of George Floyd in Washington, DC, on Sunday, calling them “hypocrites.”

“Black Lives Matter is a joke. You are the racists,” said Nestride Yumga, an American citizen originally from Africa.

“Go to Chicago. They don’t have schools, and they die every day. They don’t matter [to you] because you can’t get attention from that,” she told protesters.

One woman told Yumga to “shut up” and said no one wanted to hear what she had to say. However, Yumga kept speaking to the crowd.

“I’m proud of my country, and I don’t want my country to be portrayed like this,” Yumga told Breitbart News, adding that Floyd’s death should not be an opportunity for groups to make people feel like victims.