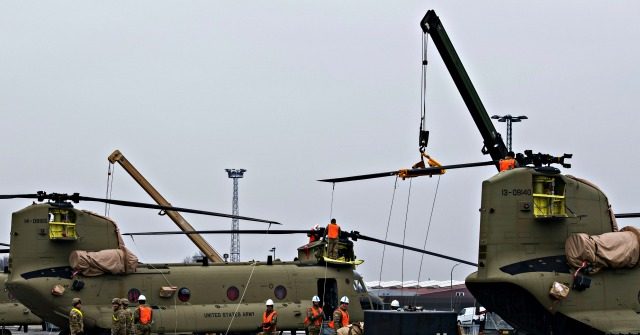 An 82nd Airborne Division’s Immediate Response Force battalion arrived to Andrews Air Force Base in Maryland Monday evening for a civil unrest mission in the nation’s capitol, according to sources.

The IRF battalion — which deployed to Iraq earlier this year to quell Iran-backed violence — brought approximately 750 soldiers, ten Black Hawk helicopters, and four Chinooks, according to sources. The helicopters are utility, not attack, and are used to transport troops short distances.

The aircraft are just one of the ways troops could be transported, but would give the IRF the ability to rapidly deploy to a number of locations in the D.C. Metro area quickly.

The force was ordered to the region on Monday afternoon, after being told to be ready on Saturday, sources told Breitbart News.

Two more IRF battalions have been put on short-notice alert status — meaning they would have to be ready to deploy within two hours if ordered.

The orders to the IRF and other active-duty military units come as President Trump urged state governors to take back the streets from rioters, who have engaged in a spree of violence, looting, destruction of property, and other crimes.

Trump also fully-activated the D.C. National Guard on Sunday, to respond to the mass unrest in Washington. Rioters burned buildings, including a historic church just one block away from the White House, injured Secret Service officers, and engaged in looting and violence.

Violence has engulfed what began as more peaceful protests last week, over the death of George Floyd after a Minneapolis police officer knelt on his neck.

Trump said in a press conference on Monday that he was on the side of peaceful protestors, but warned rioters to go home.