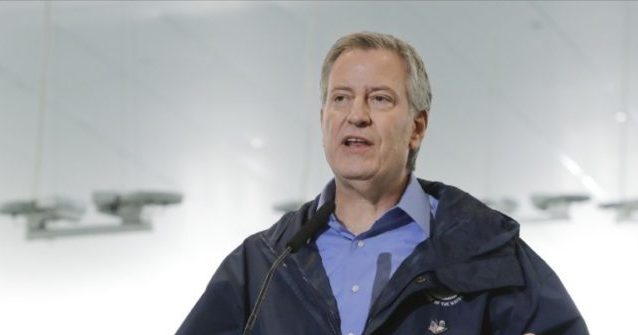 “The NYPD and New York City mayor did not do their job last night,” Cuomo said. “I think the mayor underestimates the scope of the problem and the duration of the problem. What happened in NYC was inexcusable.”

#BREAKING: Cuomo says de Blasio can be “displaced” and that he can “take over the Mayor’s job.”

Cuomo: “The NYPD and the Mayor did not do their job last night…It was a disgrace.” pic.twitter.com/NizwmXyW9H

The governor explained that he offered cities around the state, including the Big Apple, help from the National Guard to stop looting, but De Blasio rejected the offer.

“My option is to displace the mayor of New York City and bring in the National Guard as the governor in an emergency and basically you would have to take over the mayor’s job,” Cuomo then explained. “I don’t think we’re at the point,” he said, before adding the move would yield a “chaotic situation” that “wouldn’t make any sense.”

Cops running into Macy’s at Herald Square as it was being looted. Hundreds of looters and rioters here with absolutely no concerns about cops being here pic.twitter.com/NItOU7POiL

Feels like a very organized effort tonight – kids have turned up with hammers and big bags, they have spotters on the corners and cars ready to go. Group of about 500 kids now running up Fifth Ave looting whatever they want pic.twitter.com/vP97YCLis7

NYPD arrives at a Foot Locker on Broadway in downtown Manhattan 20 minutes before curfew pic.twitter.com/lzf3Wlkgjs

.@thenorthface store on West 43rd Street is being looted. pic.twitter.com/CviavTQf8m

Violence, fires and looting spread into the Bronx, where police said an officer was targeted in a hit-and-run attack.

“That is wholly unacceptable and does not represent the people of this city,” de Blasio said. “Anyone who attacks a police officer attacks all of us.”