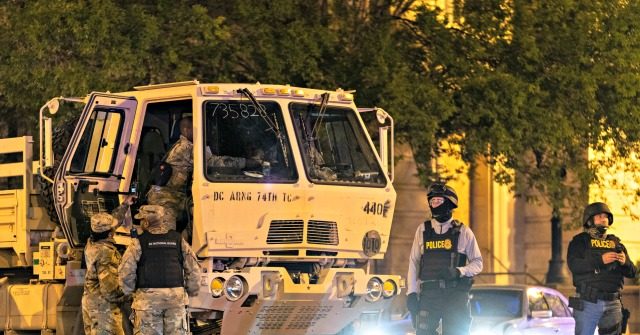 The streets of Washington, DC, were quieter on Monday night after President Donald Trump deployed the National Guard to the city to enforce a 7:00 p.m. curfew.

Federal law enforcement deployed in force around the city after successfully moving protesters out of Lafayette Park across from the White House. President Trump made a point of restoring law and order by walking to the historic St. John’s Episcopal Church that was damaged by violence next to the White House on Sunday night after delivering a speech vowing to stop the violence.

That angered Bowser, who accused the president of making the job of D.C. police harder.

I imposed a curfew at 7pm. A full 25 minutes before the curfew & w/o provocation, federal police used munitions on peaceful protestors in front of the White House, an act that will make the job of @DCPoliceDept officers more difficult. Shameful!

But the presence of federal law enforcement dominated the streets of Washington, DC.

Chairman of the Joint Chiefs of Staff General Milley was spotted visiting the troops in the streets of DC, as they deployed around the city.

General Milley, chairman of the joint chiefs of staff, walking the streets of Washington DC right now. Briefly spoke to say he is observing the situation. pic.twitter.com/fHcYOTYMzN

Dozens of protesters were arrested in the city for breaking the 7:00 p.m. curfew.

Helicopters were deployed to hover over crowds of protesters to encourage them leave the streets.

Helicopter parked over a crowd at 5/E St Nw #WashingtonDCProtest trying to force ppl away with noise and wind pic.twitter.com/x0AcC3ob0S

There were still some isolated incidents of violence reported around the city. Some shop windows were reportedly smashed on 14th Street as helicopters continued to hover low over violent protesters to disperse them. A CVS was also reportedly looted. Some businesses on 7th Street had smashed windows as well.

Hundreds of law enforcement are herding remaining protesters — many trying to smash things as they go — by every means possible: on foot, on bikes, in cars, with flash grenades, in the circling helicopter.

Pandemonium as small bands split apart being tracked across the city pic.twitter.com/3QiCfg3GOu

Things are growing unruly downtown. People are smashing windows with rocks and baseball bats. The helicopter is circling ever closer overhead. Police are throwing flash grenades to force the group in certain directions.

Helicopter just flew extremely low over remaining protesters in D.C. Right after some knocked in a few shop windows and window of cop car.

Terrifying & impossible to keep eyes open — too much debris whipped around. People scattering in all directions. pic.twitter.com/Ww8y1mK0zg

Police surrounded a large crowd of protesters on Swann Street in Washington, DC prompting some residents to welcome trapped protesters in their homes.

Tense situation on Swann Street in DC. Cops surrounded protesters and started firing pepper spray. A resident let more than 100 protesters take shelter in his home. “I’m not letting any of these kids out of my sight,” he told me over the phone. pic.twitter.com/Bk6NOIbAwf

“There’s no way for us to get out of this house and not get arrested.” Listen to what a woman who sought refuge inside what appears to be the same DC home as the video below tells @jackiebensen @nbcwashington https://t.co/fOnDJxLizw pic.twitter.com/qZDneJTBf3

Some police officers even appeared to go into the homes to arrest the protesters, according to a video filmed in the area and posted on social media.

another neighbor just opened their door and let protestors run in, Police followed them in pic.twitter.com/01StC2m8Sa

Reporters on the scene noted that areas of the city were quiet, where 24 hours earlier they were filled with rioting, vandalism, and looting.

A souvenir left on the street, spotted by @nu1wcf : pic.twitter.com/mUg13yVD1H

It is so much calmer and more peaceful in DC tonight relative to the weekend.

The scene right now at 16th and I, 2 blocks from the White House. DC National Guard members are here but essentially no protesters. Very different from the past few nights. pic.twitter.com/1lqoQKRZiU

Other reporters noted that police forces outnumbered the protesters.

In other areas, law enforcement threw flashbang grenades in the streets to get protesters to disperse.

Protesters tonight appealed multiple times to black police. This detained man tried to evoke sympathy from a DC officer as he sat while under arrest for breaking curfew #WashingtonDCProtest pic.twitter.com/XxCl8rmh2N