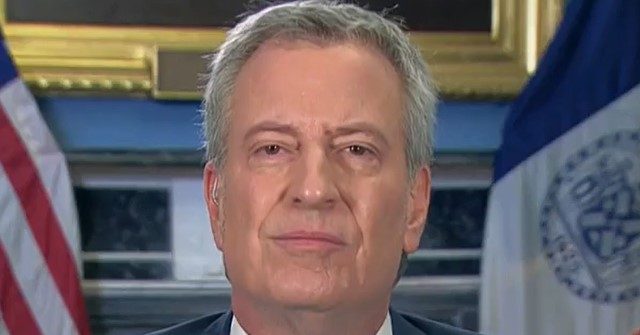 During an interview with NY1 News on Monday, New York City Mayor Bill de Blasio (D) announced that the city would implement a curfew on Tuesday that starts at 8 p.m., three hours earlier than Monday’s 11 p.m. curfew, and said that the city of New York is “fully under control and overwhelmingly calm and peaceful.”

De Blasio said that due to what he had seen in Midtown on Monday night, where “a lot” of stores had been damaged, the curfew on Tuesday would begin at 8 p.m. and go until 5 a.m.

He later said that a surge of police into Midtown was starting to change the situation.

Host Errol Louis asked, “Is the mayor of New York in control of the city at this point?”

De Blasio responded, “Errol, I mean, respectfully, I appreciate that that is your provocative question. But it’s quite clear, we’re having an issue in one part of the city. Overwhelmingly, the city right now has been peaceful, throughout. I’ve been all over the city the last few days, overwhelmingly peaceful, even though we’re in the middle of a profound coronavirus crisis, economic crisis, overwhelmingly peaceful. NYPD is doing a great job keeping the peace all over the city. The vast majority of protests today and yesterday were peaceful. We have a small situation with a small number of people doing looting, trying to take advantage of what they see around the country and this moment. And we’re doing a defense against it, and a very strong one, thousands of police officers, and now we’re gonna impose the curfew earlier. But I’m just not going to accept a misunderstanding of what’s happening in this city. This city is fully under control and overwhelmingly calm and peaceful. That’s just reality. I’m seeing it with my own eyes.”