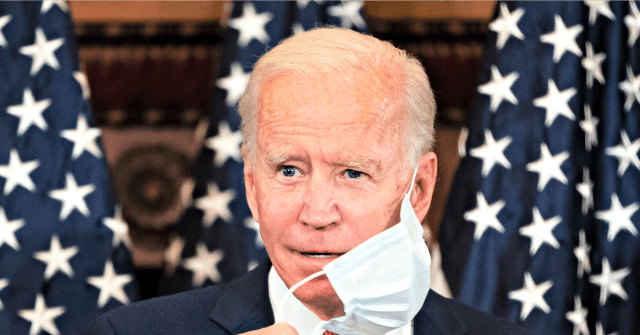 Joe Biden said on Tuesday that he “won’t traffic in fear and division” in the wake of protests over the death of George Floyd.

“I won’t fan the flames of hate,” he claimed.

Biden then added he will “heal the racial wounds that have long-plagued our country, not use them for political gain.”

But a campaign email sent shortly after his remarks included both George Floyd’s “I can’t breathe” statement and a fundraising appeal.

George Floyd’s last words. But they didn’t die with him. They’re still being heard. They’re echoing across this nation.

They speak to a nation where too often just the color of your skin puts your life at risk.

The email concluded with a giant red button and the words “DONATE TO ELECT JOE BIDEN.”

Biden claimed he wouldn’t “traffic in fear and division,” but much of his speech focused on attacking President Trump.

“The President held up the Bible at St. John’s church yesterday. I just wish he opened it once in a while instead of brandishing it,” Biden said, apparently calling Trump’s Christianity into question.

“If he opened it, he could have learned something.”

Later, Biden said, “I wish I could say hate began with Donald Trump and will end with him. It didn’t and it won’t.”

“Donald Trump has turned this country into a battlefield driven by old resentments and fresh fears,” Biden claimed, and went onto say Trump’s “narcissism has become more important than the nation’s wellbeing that he leads.”

“He doesn’t care how many millions of Americans will be hurt because he’s consumed by his blinding ego when it comes to Barack Obama— President Obama,” he said.