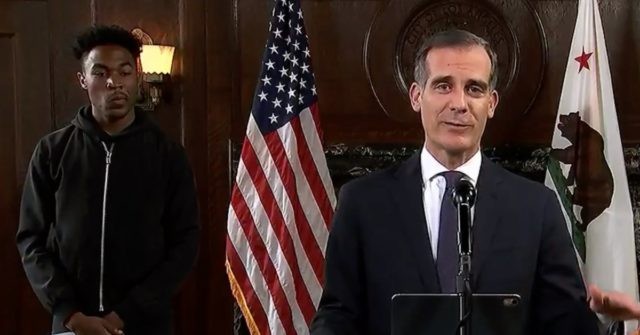 Garcetti pleaded for peace and understanding, mimicking what he felt to be the language and ideology of the protesters.

He referred to the killing of George Floyd in Minneapolis, Minnesota, last week as a “lynching.” He added that he understood that “Peace isn’t just built as a request, but it is earned when we embrace the ideal of justice.”

“I want to talk from my heart to, and about, black Angelenos and Americans,” he said, speaking at 6:00 p.m. as a curfew began on the city.

Garcetti added that he wanted to talk about “whether we make a decision collectively, not just to answer the snuffing out of a life, the lynching of a man in Minneapolis, and the collective death that we have seen pile on, and pile one, and pile on, until people wonder what black lives mean, what black bodies — whether they are valued.”

Calling the crisis a “moment of opportunity, and of hope, and of change,” Garcetti recounted his experiences kneeling among the Black Lives Matter protesters, and said he wanted people to understand that “at the end of the day the story is about the pain that people carry the day that people are born, from the trauma that are visited on their ancestors.”

Everyone taking a knee at the #BlackLivesMatter protest outside Mayor Garcetti’s house pic.twitter.com/b4i7mBeTqr

He then handed the podium to Damion Pilgrim, 16, a youth leader in his church in Compton who told his story of being stopped by police and allegedly racially profiled.

“There is no need to loot and tear things down. It is time for us to rebuild. Conversations are what we need,” Pilgrim said.

Returning to the microphone, Garcetti recounted several difficult experiences he had heard about from black residents, and said that he wanted “non-black Angelenos” to hear and understand them.

To black Angelenos, Garcetti said: “I hear you.”

He pledged to spend more money on programs aimed at “trauma-based recovery for trauma and people who carry trauma.”

Garcetti warned people not to break the law during the citywide curfew, which went into effect as he spoke: “We will go after people who are looting — or, worse, causing violence against demonstrators or to peace officers.”

He called for a “summer of peace,” promising jobs for young people and peaceful spaces, and pledging to provide the “mental health care that we need to deal with what that feels like, day after day after day, to be a young black man who doesn’t know why people don’t trust him, look at him that way, feel that way every moment they inhabit a body.”

The mayor spoke as public outrage spiked in the wake of comments Monday by Los Angeles Police Department Chief Michel Moore, who condemned rioters by telling them, “His death is on their hands as much as it is those officers.” (Moore apologized Tuesday, saying that he “misspoke.”)

As the sound of police sirens wailed in the background, Garcetti called on the city, and the country, to embrace hope.

“I celebrate you on the streets. If you’re breaking the law, we will not let you change the message,” he declared.

“Hopelessness is not our option. We only have hope. And we only have each other.”