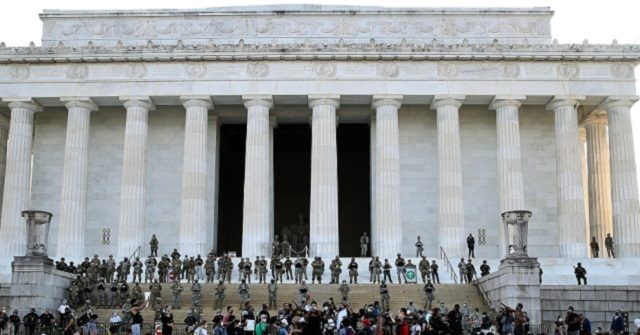 Dozens of National Guardsmen and federal police officers stood watch on the steps of the Lincoln Memorial Tuesday evening, opposite a large group of protesters.

The soldiers and airmen stood facing the protesters while wearing masks, helmets, and personal protective equipment.

President Donald Trump activated all members of the D.C. National Guard to respond to the civil unrest in the nation’s capital — adding hundreds more Guardsmen to the mission to protect human life and property.

Rioters defaced Lincoln Memorial on Sunday as the capital city descended into chaos. They also looted stores and burned buildings including historic St. John’s Church located a block away from the White House.

The next day, the president called in active-duty military forces to defend the city. That evening, the capital was quiet as Chairman of the Joint Chiefs of Staff Army Gen. Mark Milley, Defense Secretary Mark Esper, and Attorney General Bill Barr walked the streets of downtown D.C.

Your Lincoln Memorial this evening. pic.twitter.com/QByGgWeDDm

Trump vowed he would protect the nation’s capital in a White House Rose Garden statement on Monday:

I am taking immediate presidential action to stop the violence and restore security and safety in America. I am mobilizing all available federal resources — civilian and military — to stop the rioting and looting, to end the destruction and arson, and to protect the rights of law-abiding Americans, including your Second Amendment rights.

I am also taking swift and decisive action to protect our great capital, Washington, D.C. What happened in this city last night was a total disgrace. As we speak, I am dispatching thousands and thousands of heavily armed soldiers, military personnel, and law enforcement officers to stop the rioting, looting, vandalism, assaults, and the wanton destruction of property.

The president also warned that the 7 p.m. curfew in Washington would be strictly enforced.

“Those who threaten innocent life and property will be arrested, detained, and prosecuted to the fullest extent of the law,” he said.