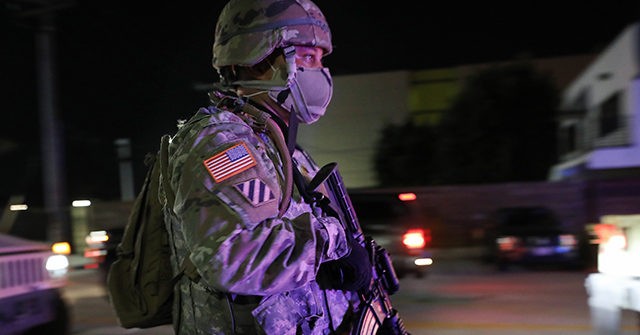 A heavily armed man wearing a National Guard uniform was arrested early Tuesday morning on assault weapon charges in Los Angeles, according to FOX 11. Reporter Bill Melugin said the arrest occurred near protests over the death of George Floyd in the city’s downtown area.

BREAKING: @FOXLA has learned that LAPD arrested 31 y/o Gregory Wong in DTLA this AM while dressed as/impersonating National Guard. He was armed to the teeth and was booked on assault weapons charges. LAPD says federal charges may come next. Sources confirm this photo. @FOXLA pic.twitter.com/NPp8mFuh9x

The suspect, 31-year-old Gregory Wong, was taken into custody at 1st Street and N Main Street around 1:30 a.m. Tuesday morning. The site is located across the street from the Los Angeles Police Department’s (LAPD) headquarters.

“Authorities [said] that the suspect was dressed in National Guard apparel and had multiple weapons on him at the time of the arrest,” FOX 11 notes. “Officials say Wong is from Nothern California but was living in the Los Angeles area.”

Wong was charged with the manufacturing and distribution of assault weapons and is being held on a $50,000 bond. LAPD said Wong could also face federal charges.

No further details regarding the arrest are currently known.

Editor’s Note: The photo accompanying this article does not depict any of the individuals mentioned in this story. It is illustrative rather than a literal capture of these events.