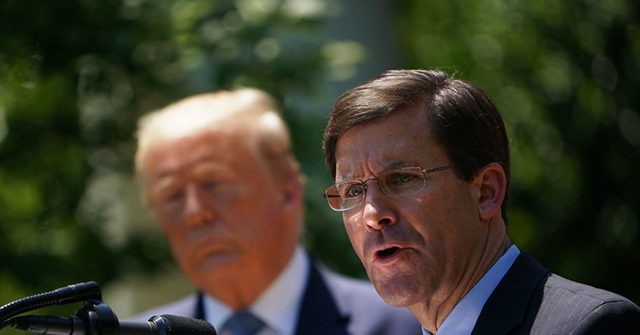 Defense Secretary Mark Esper told Pentagon reporters at a briefing Wednesday morning that he was not aware he would be accompanying President Trump to St. John’s church for a “photo op” on Monday.

He said he was aware he would be visiting the church and National Guard troops on the streets of D.C. but did not expect what took place.

After the historic church was burned by rioters, Trump walked across the street from the White House with members of his cabinet, including Esper, and stood in front of the church and held up a bible as members of the press corps snapped photos.

“I was not aware a photo op was happening,” Esper said. “I do everything I can to stay apolitical.”

However, also during the briefing, Esper paid his condolences to George Floyd’s family and said that he and members of the military swore an oath to protect freedom of speech.

He also said he does not support invoking the Insurrection Act, which would allow U.S. military to act as domestic law enforcement.

“I’ve always believed and continue to believe that the National Guard is best suited for performing domestic support to civil authorities in these situations in support of local law enforcement,” he said.

“I say this not only as secretary of defense, but also as a former soldier and a former member of the National Guard. The option to use active duty forces in a law enforcement role should only be used as a matter of last resort and only in the most urgent and dire of situations,” he said.

“We are not in one of those situations now. I do not support invoking the Insurrection Act.”