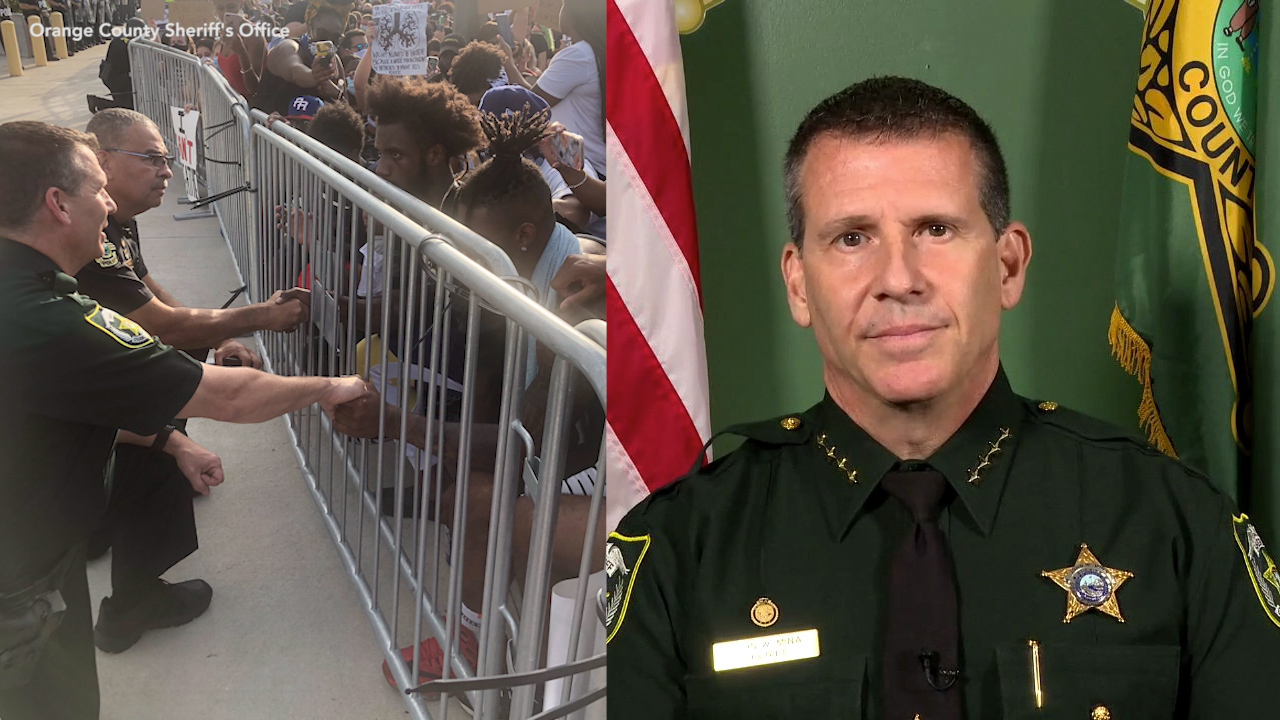 Orange County Sheriff John Mina explained to Fox News that it was important for him to “listen to and hear the anger and frustration” of Orlando, Fla. demonstrators protesting the death of George Floyd, a black man who died last week while in police custody in Minneapolis.

Mina credited the young men that he was speaking to at the protest for asking both himself and Orlando Police Chief Orlando Rolón to kneel with them in a moment of solidarity.

“The two young gentlemen asked us to kneel and we said, ‘Well, why don’t we kneel and pray?’” explained Mina. “And so we did, and I think that sent a great message not only to the people protesting out there but to our officers and our deputies who were watching their two leaders here in Orange County kneel, take a knee and listen to what the protesters had to say.”

Mina sent an email to his Orange County community condemning the “indefensible, unexplainable and criminal” actions of the officers allegedly involved in Floyd’s death. Sheriff Mina told Fox News that the Orange County Sheriff’s Office has had a use-of-force policy for decades.

“One of the things that is forbidden in our policy is the use of a neck restraint or chokehold. So, what you saw the Minneapolis police officer do, obviously, that’s against policy,” he said. “Not only is it against policy, it was a criminal act. But we’ve been training for years here on the appropriate amount of use-of-force.”

A string of police killings of young black men in 2014 prompted 24 states to quickly pass some type of law enforcement reform, but many declined to address police use-of-force. Six years later, only about a third of states have passed laws on the issue.

As of August 2018, at least 16 states had passed use-of-force laws, according to the nonpartisan National Conference of State Legislatures. A handful of those directly restricted what police could do. In Utah and Missouri, for example, force used by officers must be “reasonable and necessary.”

Colorado has banned chokeholds, the maneuver used on Eric Garner, the man who was killed at the hands of police officers on Staten Island in 2014. Garner’s dying words “I can’t breathe” have become a rallying cry across the globe for protests against police brutality.

Other states created task forces to set new standards, boosted training or improved tracking of officers’ use of guns and deadly force. Sheriff Mina told Fox News that he “does not have any issue at all with making some kind of national standard” when it comes to use-of-force policies.

Sheriff Mina is open to new ways of protecting the community and explained that it is important to keep an open dialogue with the community. Oftentimes, he said, citizens have come up with a number of ideas and recommendations that law enforcement should implement.

“There are some things that we have to look at with an open mind and say, you know what, maybe we need to take a second look at it,” said Mina. “Law enforcement, our profession has been making incremental changes these past several years, and we are improving as a profession. We just got to get better, and certainly, we are open to ideas and recommendations from the people that we protect and serve.”

For more on the George Floyd protests and insights on policing, watch the interview with Orange County Sheriff John Mina above.

Emily DeCiccio is a reporter and video producer for Fox News Digital Originals. Tweet her @EmilyDeCiccio.