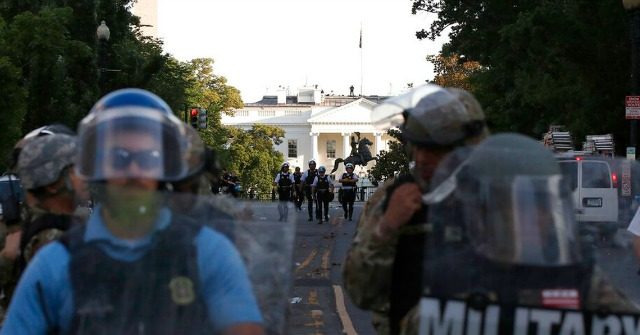 Looking at you, @realDonaldTrump.

George Floyd had coronavirus, according to a full autopsy report.

BREAKING: Our bill to criminalize the use of chokeholds by the NYPD now has 35 sponsors in the @NYCCouncil, meaning it can override a Mayoral veto.

Let’s hope it doesn’t come to that. But if it does, we’re ready. https://t.co/1Lb6lPBSVW

WATCH: A Sarasota police officer is on leave and under investigation after video surfaced showing him with his knee apparently on a man’s neck. https://t.co/D6eH4xMdV0 pic.twitter.com/digQMBWUUQ

I will be introducing legislation to require uniformed federal officers performing any domestic security duties to clearly identify what military branch or agency they represent. pic.twitter.com/2kaFAlWUow

This picture really troubles me. Armed forces in the nation’s capital, appearing to have been stripped of all badges and name tags—making them totally unaccountable to the people—is something I’d expect to see from a dictatorship, not a democracy. https://t.co/KBLPa9nhUI

Commissioner LaTrisha Vetaw has put forth a substitute motion asking staff to create a plan for addressing policing in parks. Said she spoke with dozens of Black mothers concerned about what the Park Board’s safety plan is if it cuts its ties immediately with MPD.

In The Bronx, Small Business Owners Reel From Night Of Looting And Vandalism https://t.co/NU3VKQJqaq via @gothamist

The owner says no police showed up to stop the looting at his shop, but 15 officers appeared while he was cleaning it up.

“I was with three black men and 15 police come to us and they’re thinking I was trying to vandalize my own store.” https://t.co/yMigjl1zHs

Two incoming students at Missouri public universities have withdrawn from their schools after a video they were involved in appeared to mock the death of George Floyd. https://t.co/nxIgTkKUYX

Protesters chant “I can’t breathe!” while lying down on Pennsylvania Ave. NW between 12th St. and Freedom Plaza outside the mayor’s office. #dcprotest pic.twitter.com/6o82CINuxC

Group @concernedofdc has made it to the Capitol. Marchers sitting down as speakers share their stories. @wusa9 #DC #GeorgeFloyd #protest pic.twitter.com/Z39nX9v1GZ

Stunning scene in downtown D.C. as the sun begins to set. Thousands are lying on the hot pavement in extreme heat and humidity — baking underneath their masks — almost a week into the protests.

Investigators are going house to house on 15th and Swan asking neighbors their account of what happened on Monday night. @wusa9 #RahulDubey #protests #DCProtests pic.twitter.com/VKIBuWqNDm

Throughout the afternoon passers-by and protesters who were here on Monday night have stoped by to say thank you. One man who heard about the story on social media left a sign that say “You are GOAT.” @wusa9 #protest #DCProtests pic.twitter.com/KmzDAvJcrM

Booking photos have been released of the three former Minneapolis officers, now in custody. You can read the complaints against them here. https://t.co/jhPMYX7Ng8 pic.twitter.com/o5p35m43ag

At the Hyatt Regency, I have been informed these are private security and when I asked why they were identifying as police, I was told by one guard they are “borrowing stuff” before his supervisor (pictured here) silenced him. #DCProtests pic.twitter.com/S40cniepBb

“I just wanted to tell you I’m proud to be able to run for President and still be on Snapchat.”pic.twitter.com/d9D0Lw8fyi

Lego is pulling their City Police sets from online stores and shelves, and cancelling all marketing related to them.

Wow, Lego has now gone a step further and is pulling down all the marketing for any sets they have that are based around the Police theme or include Police characters. That’s a decades-long staple being stepped off: https://t.co/vPmim1rEah

This includes the Lego Architecture White House set, which pretty much spells out where they stand politically

Ellen Pompeo participated in a protest in LA this afternoon, taking a knee with others in support of Black Lives Matterhttps://t.co/TThgepafxv

“I’ve given up speaking to Pres. Trump. We need to replace President Trump.”

how many of the 450 people watching Trump’s interview with Sean Spicer are journalists? pic.twitter.com/6mOtHUkBQ5

Trump to Sean Spicer: “You did very well on Dancing with the Stars.” pic.twitter.com/v0fxRWqRjE

Taking a shot at Mitt Romney for getting “destroyed” by Obama, Trump then tells his former press secretary Sean Spicer that he would’ve beaten Obama in 2012 if he ran.

“I could’ve won that race easier than beating Crooked Hillary Clinton, It would’ve been easier.” pic.twitter.com/2Zysx2zSui

The interview with Trump will be the first time a former White House press secretary has interviewed their former boss as a sitting president.

One very telling thing about these Fox News polls: Biden’s massive lead in each state on who voters trust to handle race relations.

Saints QB Drew Brees taking a lot of heat from key teammates on defense and offense:

Malcolm Jenkins was not a fan of Drew Brees’ comments about Colin Kaepernick taking a knee 😳 https://t.co/73H73r9oPq pic.twitter.com/kcbz6a5LvN

He don’t know no better.

Highlight: @readdanwrite asks @drewbrees what the star NFL quarterback thinks about “players kneeling again when the NFL season starts.”@drewbrees: “I will never agree with anybody disrespecting the flag of the United States of America or our country.”

Broncos’ HC Vic Fangio now has released this statement pertaining to the controversial comments he made Tuesday about racism in the NFL. pic.twitter.com/ef5y99Xdo2

In response to the use of unmarked federal officers in D.C. today, @RepDonBeyer says he is working on legislation that would make doing that in the future illegal. https://t.co/Alv8xKePmz

D.C. Code requires @DCPoliceDept officers to wear “enhanced identification” when they are covering First Amendment assemblies, and to be identifiable even in riot gear. But that doesn’t apply to federal law enforcement. https://t.co/Alv8xKePmz

James Mattis: “Donald Trump is the first president in my lifetime who does not try to unite the American people—does not even pretend to try. Instead, he tries to divide us…We are witnessing the consequences of three years of this deliberate effort.”https://t.co/6wFo2OwTVk

Mattis goes Mad Dog on Trump, says he never imagined troops “would be ordered under any circumstance to violate the Constitutional rights of their fellow citizens—much less to provide a bizarre photo op for the elected commander-in-chief, w military leadership standing alongside” https://t.co/G09dEayBwJ

Asked about the President bringing federal troops into DC, Mayor Bowser says she hasn’t spoken with the President, but talked with “entry level in the federal govt.” She says “this calls attention to every American why DC needs to become the 51st state…we need autonomy”

NEW: Former Pres. Jimmy Carter: “In my 1974 inaugural address as Georgia’s governor, I said: ‘The time for racial discrimination is over.’ With great sorrow and disappointment, I repeat those words today.” https://t.co/qBwzUKoQW2 pic.twitter.com/cDpsxW7gRO

The 1992 Uprising left entire blocks of Los Angeles’s black communities burnt to the ground. It took decades to recover and some areas still bear the scars.

Police seem much more subdued than in other days of unrest here in Philly since #GeorgeFloydProtests began. Unclear how long that will last. Last night WHYY reported PPD Chief Danielle Outlaw issued a memo warning cops to respect media’s right to film and avoid excessive force.

Philly Police not enforcing curfew against large march of thousands of people.

Philadelphia removes the statue of a controversial mayor and former police commissioner, Frank Rizzo, who many say had a corrupt and racist approach to policing and governing https://t.co/gIRRWdDInG pic.twitter.com/29y8Jkfijm

CNN’s Don Lemon immediately says this is what a president sounds like.

How to president by @BarackObama 10/10 pic.twitter.com/yPsgBqAEOj

This is what a real President does. pic.twitter.com/Alu4yqbrSq

Former President Barack Obama: “In some ways, as tragic as these past few weeks have been, as difficult and scary and uncertain as they’ve been, they’ve also been an incredible opportunity for people to be awakened to some of these underlying trends” https://t.co/YIsW2BLTgf pic.twitter.com/EYv6d1rzoC

Obama is showing off with these complete sentences.

D.C. Who are these people?

If one of these men uses force against a person, what recourse would there be if it’s excessive?

Unidentifiable law enforcement patrolling DC. For three days journalists have asked them which agency they are with. No answers. https://t.co/wGHHFXT8bg

Back outside the White House. Today the perimeter has been pushed back another half block. Federal law enforcement of some kind, but they won’t identify themselves, and all insignias and name plates have been removed. pic.twitter.com/q5dmdMgkLV

These people are not the Park Service, they are not regular military, they are not National Guard. So … WHO THE HELL ARE THEY? Are they guards from the bureau of prisons? Private mercenaries courtesy the DeVos’ family? ICE agents? Are any of them trained for this work?

For what it’s worth, St. John’s Church was NOT inside any kind of security perimeter yesterday, or last night.

All day and last night Fox figures and anchors have argued that it was a lie for other media to say that tear gas was used.

I won’t hold my breath for Fox’s correction pic.twitter.com/xhekDbWsGb

WATCH: “No man or woman should be without their fathers,” says Quincy Mason Floyd, son of George Floyd.https://t.co/LoNLLviWl1

The Blackout Tuesday tag on Instagram has 24.9 million posts

The Justice for George Floyd petition has 11.8 million signatures

The point of today is being missed

A newspaper chooses what voices to elevate. “A lot of people feel the way he does” or “It’s our job to present diverse opinions” are not excuses to showcase dishonest, incendiary filth. pic.twitter.com/QCfPY1f9W6

Earlier this week: Tom Cotton tweets that protesters should be executed

NYT: [IMMEDIATELY PRINTS AN OP-ED FROM HIM] pic.twitter.com/MdEK3asm5v