More than 1,000 protesters gathered Tuesday outside the Getty House in Los Angeles, which serves as the residence of Mayor Eric Garcetti.

The crowd appeared to remain peaceful, with no reports of vandalism or looting in the immediate area, as demonstrations following the May 25 death of George Floyd in Minneapolis continued across the U.S., FOX 11 of Los Angeles reported.

“It’s a Black Lives Matter thing,” one protester told FOX 11. “It’s not to get confused; it’s not us versus you, it’s not white versus black. It’s a lot of our people versus bad cops. We understand there’s good cops but there’s a lot of bad cops and it’s not a job that can have bad cops.” 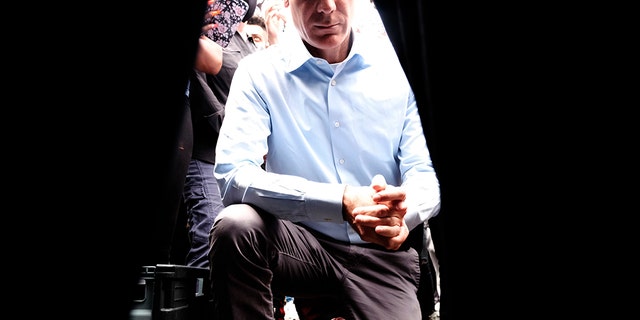 After the protest was already underway, Garcetti made some remarks at an evening news conference at City Hall.

“I hear you that this isn’t just about the criminal justice system. This is also about society and where we put out resources,” Garcetti said, according to KTLA-TV of Los Angeles.

Also appearing at the briefing was Davion Pilgrim, 16, a student from Morningside High School in Inglewood, who was recently stopped by police, and racially and criminally profiled.

“I was accused of being associated with a gang and that really hurt, because that’s not me,” Pilgrim said, according to KTLA. “We want to make sure that what happened to George Floyd does not ever happen to someone who looks just like me.”

Earlier in the day, Garcetti appeared at a protest outside Los Angeles police headquarters, where he kneeled in solidarity with the protesters.

“I hear you. I hear what you are saying about the police,” the Democrat said.

The protest at the mayor’s residence came one day after a previous news conference in which Los Angeles police Chief Michel Moore drew criticism for claiming protesters shared in the blame for the death of Floyd, the Minneapolis man who died in police custody, sparking a weak of protests, rioting and looting throughout the U.S.

Moore apologized soon after making the remarks – but Garcetti, who appeared at the same news conference, faced calls to fire Moore and resign from office himself.