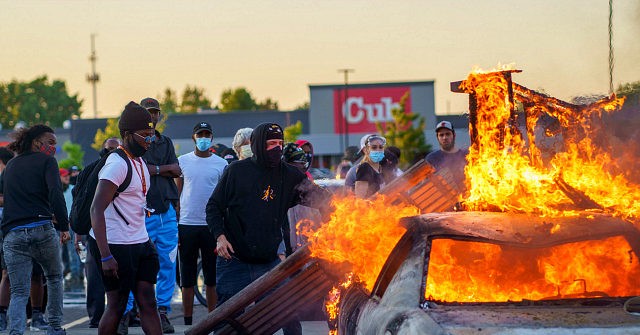 UCLA Professor Robin Kelley suggested this week that black Americans have no choice but to riot in the aftermath of George Floyd’s death. As Kelley explained in a UCLA interview, “My wife asked me this question last night, ‘Do you think this is right?’ I said, ‘What other choice do people have?’”

UCLA posted a series of faculty interviews on its website this week that address the recent social unrest over the death of George Floyd. Breitbart News has reported extensively on the riots that have erupted in major cities around the United States. Rioters have destroyed buildings and looted merchandise from local businesses.

UCLA Professor Robin Kelley argued that Black Americans have no other choice than to protest in the aftermath of Floyd’s death.

“I’m 58 years old now. I don’t remember a year that there wasn’t half a dozen cases, spectacular cases of police violence. You could do a New York Times front page, just like you did of the COVID deaths, and easily get 100,000 names, beginning in 1960, of people who died,” Kelley said. “My wife asked me this question last night, ‘Do you think this is right?’ I said, ‘What other choice do people have?’”

UCLA Professor Darnell Hunt, who teaches sociology and African American studies, argued that the term “riot” is inappropriate.“The term ‘riot’ tends to connote a senseless venting of frustration, of destroying your own community and all these other things that are counterproductive, as if there couldn’t be political value in urban unrest and forcing the system to examine itself,” Hunt said.

Hunt argued that Americans are unfairly prejudiced against “looting” even though many of the looters during the 1992 Los Angeles riots, which erupted after the death of Rodney King, stole basic necessities.

“You had a huge immigrant population that was barely getting by, barely surviving, and people were going to drugstores and ‘looting’ diapers, things to make ends meet in their families,” Hunt added. “To minimize that as just, ‘Oh, people are just looting,’ completely robbed it of the political content and the political possibilities that people are trying to communicate by taking a risk and getting involved.”