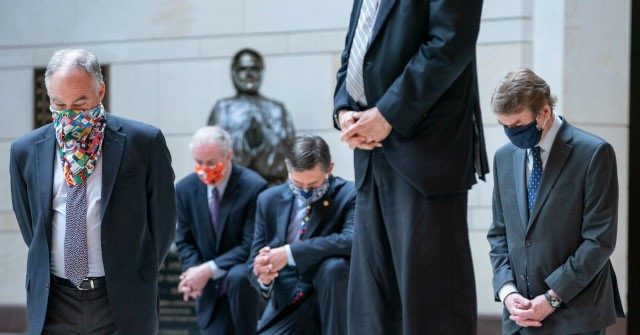 Five Democrat senators knelt during a moment of silence for George Floyd — a black man who recently died in police custody in Minneapolis — on Capitol Hill Friday afternoon.

“Today we gather here in solemn reverence to not just mark his tragic death but to give honor to his life,” Booker stated, according to The Hill. “George Floyd, Ahmaud Arbery, Breonna Taylor. May we honor those dead by protecting all who are alive.”

Speaking to reporters afterward, Booker said the moment of silence was a “very painful moment

“They, like so many Americans, want to do something,” said the New Jersey Democrat. “And we all know we’re all working on legislation but the conversations that led to this was because people feel, in my opinion, that we need to do more.”

“For all of us, this would be a moment of solidarity and sort of sharing common spirited grief so it was very moving to me to see everyone,” he added.

Floyd’s family praised him as a “powerful man” who “would stand up for injustice anywhere” during his memorial Thursday in Minneapolis.

The service, which was broadcast on television and live-streamed online, began at 1 p.m. at the North Central University sanctuary.

George Floyd’s brother, Philonise Floyd, described his brother as “powerful” and said he “had a way with words.”

“Guys that was doing drugs, smokers and homeless people — you couldn’t tell because when you spoke to George, they felt … like they were the president, because that is how he made you feel.

“Every day, he walks outside, there’d be a line of people, just like when we came in, wanting to greet him and wanting to have fun with him.”

His younger brother, Rodney Floyd, said George Floyd taught him how to be a man.

George Floyd “was doing the best that he can and the mistakes that he made and watching him, correcting myself as a teenager growing up. And learning from him how to be a man.”

He “would stand up for injustice anywhere.”