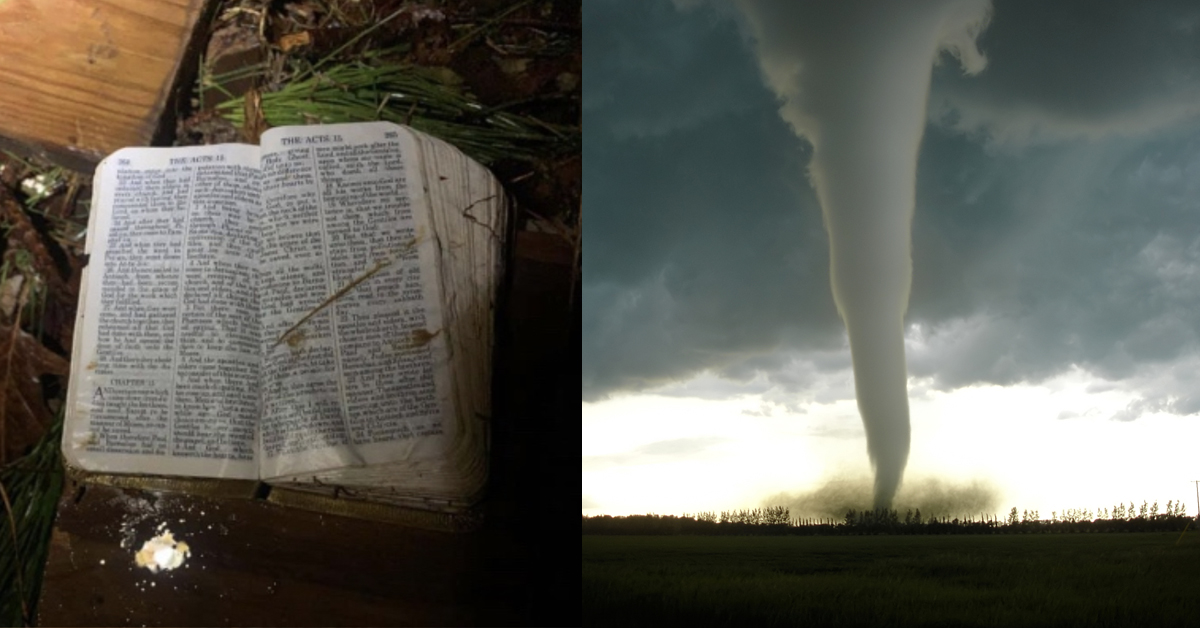 In the aftermath of severe weather and tornados across Alabama that left a Lawrence County couple dead and their son in critical condition, one local rescue worker’s discovery is giving a grieving community strength in their time of mourning.

Jason Fields, who works for the Alabama Department of Agriculture and volunteers with Morgan County’s Danville Fire & Rescue Department, published a Facebook post with a picture of a Bible found amidst tornado debris. The bible was left opened to Acts 15.

Fields’ explained in the picture, “Around 24 hours ago, lives were changed in an instant. Our department went to assist with the response in Town Creek.”

“In previous tornado disasters, I have helped recover bodies, sift through debris to recover property, and offered support to those in the worst of times,” he added.

However, his discovery on Monday was unlike anything he had seen previously.

“Last night I stumbled upon this New Testament among thousands of pieces of debris,” Fields said. “The storm had just destroyed the homes of several families, taken two lives, and critically injured others, but this Bible remained unharmed.”

“Could there be a better reminder to us of the power of God?” he concluded.

Brianna Collett, a commenter on Fields’ Facebook post, also highlighted that one of the verses on the page the Bible was discovered open to seems to be especially fitting:

Governor Kay Ivey released a statement on Tuesday morning about the severe weather, saying, “This morning, I began the process of calling local leaders who were affected by last night’s storm. I join the community of Town Creek in grieving the loss of a husband and wife. While most of us slept through the storm, a family is waking up today devastated. I will be praying for their family and the community, and I offer any assistance from the state that is available as they start the process of rebuilding.”

“I urge everyone to remember those who were affected, whether it be those who have lost family members, those who were injured or those who lost their homes. We must support our neighbors during the days to come and remind them they are not alone. I also want to thank Alabama’s first responders who were out in the middle of the storm, risking their own lives, to protect and aid their fellow Alabamians,” the governor concluded.