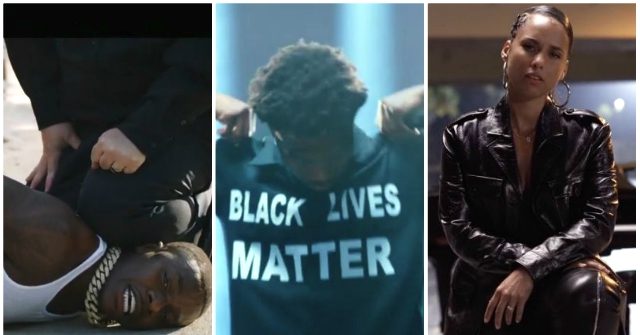 The BET Awards kicked off Sunday night with an extended, star-studded rendition of Public Enemy’s “Fight the Power,” one of a slew of tributes to the Black Lives Matter movement that dominated the annual awards show that honors black achievement in entertainment and sports.

“Fight the Power” helped to open the virtual ceremony, with a montage of Black Lives Matter protests and other scenes of racial protest.

Host Amanda Seales of HBO’s Insecure paid tribute to Breonna Taylor during her opening monologue, calling for justice for the 26-year-old Kentucky resident who was killed during a police raid earlier this year. Seales noted  “Breonna Taylor’s killers have not been arrested.”

The show also featured a performance by Roddy Ricch, who wore a Black Lives Matter t-shirt, while performing “High Fashion” and “The Box.” The performance saw rapper Roddy Ricch rapping from a battered police car. “In loving memory of all the lives lost to racism and police brutality” read the message at the end of the performance.

D Smoke and SiR also performed a number that was replete with visual references to Black Lives Matter protests.

Alicia Keys performed her new song “Perfect Way to Die.” Keys ended her performance and took a knee, as the camera pulled overhead showing the names of black people killed written in chalk on the street below.

The early awards of the evening went to singers Megan Thee Stallion for hip-hop artist of the year, Olympic gymnast Simon Biles for female athlete of the year, and LeBron James for sportsman of the year.

Michelle Obama helped present Beyoncé with the BET humanitarian award, saying of the Grammy-winning singer “you inspire me, you inspire all of us.”

UPI contributed to they article.