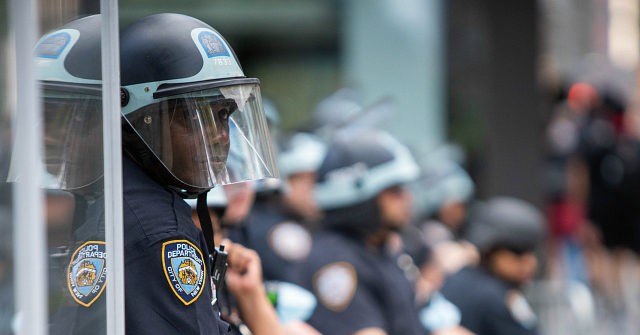 Close to 300 New York City Police Department (NYPD) officers have filed for retirement over the last month amid riots against the police and as violent crime keeps surging.

According to figures released to the New York Post, about 272 NYPD uniformed officers have filed for retirement since riots over the death of Minneapolis resident George Floyd began in late May. At the same time last year, about 183 officers had filed for retirement, indicating a nearly 50 percent spike in retirements this year.

One officer, who wanted to wait to retire until he hit 30 years with the NYPD, told the Post “It’s an all-out war on cops and we have no support.” More than 300 officers were injured in the recent riots.

Mayor Bill de Blasio has vowed to cut funding to the NYPD and Commissioner Dermot Shea has announced the disbanding of the city’s 600-officer undercover anti-crime unit that was responsible for keeping shootings and violent crime down.

The exodus from the NYPD comes as violent crime in New York City keeps surging, partially thanks to the state’s bail reform policy that eliminates bail for most nonviolent crimes and many violent crimes.

Murder has increased by nearly 50 percent in New York City over the last month compared to the same time last year. Likewise, burglaries have spiked more than 122 percent and grand larceny auto has increased more than 56 percent.

In the last week, shootings in New York City have increased by more than 341 percent, with a 414 percent increase in shooting victims compared to the same time in 2019.