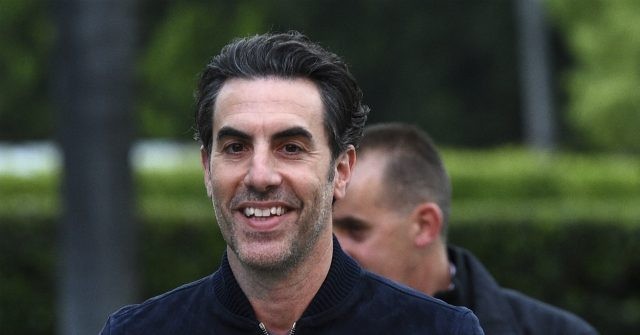 Actor Sacha Baron Cohen infiltrated a pro-gun rally in Olympia, Washington, on Saturday, where he ended singing a racist song about Barack Obama, Dr. Anthony Fauci, and the coronavirus.

The event in question was billed as a “March for Our Rights 3” organized by a group known as the Washington Three Percenters, who came up with the idea as a response to the “March For Our Lives” gun control movement that swept America in 2019. According to Yelm City Councilman James Blair, Baron Cohen hired his own security team to help ensure he got his time on the stage, all while dressed in overalls and a fake beard.

“He came on stage disguised as the lead singer of the last band, singing a bunch of racist, hateful, disgusting shit,” Blair wrote on Facebook after the stunt. “His security blocked event organizers from getting him off the stage, or pulling power from the generator.”

Sacha Baron Cohen got Bill Gates into his song. Dude was comprehensive. pic.twitter.com/ZEApsj5pLD

“After the crowd realized what he was saying, and turned on him, his security then rushed the stage and evacuated them to a waiting private ambulance that was contracted to be their escape transport,” Blair added.

This post is by a city council member in Yelm, Washington. Earlier this afternoon, Sacha Baron Cohen crashed the event of Washington 3% – a right-wing group of armed insurrectionists and white supremacists – in Olympia.

I look forward to the video… pic.twitter.com/zilUA2zJQU

During his singalong, Baron Cohen talked about injecting Obama, Fauci, the World Health Organization, CNN, and anyone caught wearing a mask with the “Wuhan flu” or chopping them up “like the Saudis do,” a reference to the murder of Washington Post journalist Jamal Khashoggi.

Some believe Baron Cohen may have pulled this latest stunt for a possible second season of his Showtime series Who Is America?. The show’s first season saw the 46-year-old British prankster successfully dupe the likes of vice president Dick Cheney, Alabama politician Roy Moore, former presidential candidate Bernie Sanders, and dozens of other ordinary citizens.