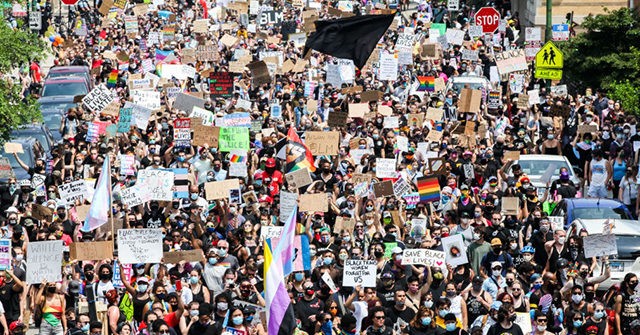 Thousands packed the streets in Chicago for an unofficial gay pride march despite Mayor Lori Lightfoot, the first openly gay mayor, canceling the official annual event because of her worries over the coronavirus.

Organizers insisted that the rally held in the city’s West Side Lakeview neighborhood was an attempt to “reclaim” the “grassroots” efforts to push gay pride, according to ABC 7.

The gay pride parade has roots in the Windy City going back to 1972 and has taken place in the Boystown area of the city until this year, when it was canceled over the coronavirus. But the cancellation did not deter avid pride marchers, who began gathering at noon on Sunday near the CTA Belmont station in the Lakeview neighborhood.

Hundreds flocked to the march flogged by social media posts until thousands were massed in close proximity for a two-mile demonstration into Uptown.

“The reason the march is so important is to highlight those lives that we lost and highlight the people whose lives may not have been lost, but have been wrecked just because they exist openly,” Ashabi Owagboriaye told ABC 7.

Organizers tried to tell marchers that masks were required in compliance with the city’s coronavirus rules.

But many photos posted to social media by pride enthusiasts showed large numbers of people without masks, in contradiction to the coronavirus response orders issued by Lightfoot.

Having bright and beautiful memories today of the 2019 Chicago Pride Parade. Pride matters! Inclusion for all!! pic.twitter.com/I6ZT9Z0N4T

Cops chill as Pride partiers overtake Halsted Street ’til 4 a.m. Dance on a patrol car? Sure! Set off fireworks in the middle of a crowd? Why not! Fistfight? Of course! Videos posted.https://t.co/qkGTlaC19v

Once upon a time, we lived in “boys town” (aka the gayborhood) in Chicago, & my (now 14yo) son’s school marched in the pride parade, & it was beautiful. I miss those days. 🌈 pic.twitter.com/RGmxTsSEDY

This is traditionally #pride weekend in Chicago! And while the parade is not happening, we can still celebrate!For all the people in my life- know you are supported, encouraged & loved to live and pursue your best, most authentic life w/o compromise or shame! Happy Pride y’all! pic.twitter.com/WCVOI3F0sn

Meanwhile, if the scourge of coronavirus appears less worrisome in the minds of the weekend’s pride marchers in the Lakeview neighborhood, the bloodletting in some of the city’s other communities continued unabated with more shot and killed this weekend than in any weekend going back years. Eighteen people were shot and killed, and an additional 48 were wounded over those 48 hours.