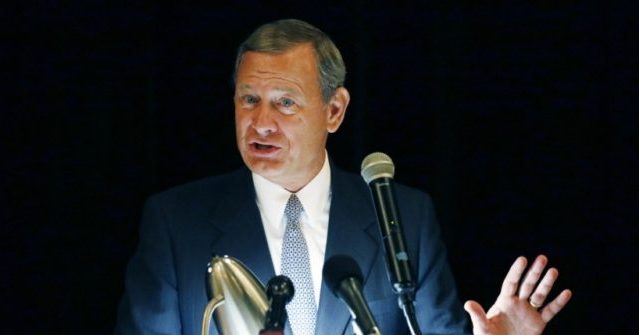 Supreme Court Chief Justice John Roberts joined the liberal wing of the Court Monday in a 5-4 ruling that struck down a Louisiana abortion safety law.

In the majority opinion for June Medical Services v. Russo, Justice Stephen Breyer wrote Louisiana’s law requiring abortionists to have admitting privileges at nearby hospitals to facilitate continuity of care in the event of emergencies has “nothing to do with the State’s asserted interests in promoting women’s health and safety.”

Roberts wrote in his concurrence:

The legal doctrine of stare decisis requires us, absent special circumstances, to treat like cases alike. The Louisiana law imposes a burden on access to abortion just as severe as that imposed by the Texas law, for the same reasons. Therefore Louisiana’s law cannot stand under our precedents.

In his dissent, Justice Clarence Thomas wrote regarding the issue of whether abortion providers “[can] be presumed to have third-party standing to challenge health and safety regulations on behalf of their patients”:

Today a majority of the Court perpetuates its ill-founded abortion jurisprudence by enjoining a perfectly legitimate state law and doing so without jurisdiction. As is often the case with legal challenges to abortion regulations, this suit was brought by abortionists and abortion clinics. Their sole claim before this Court is that Louisiana’s law violates the purported substantive due process right of a woman to abort her unborn child. But they concede that this right does not belong to them, and they seek to vindicate no private rights of their own. Under a proper understanding of Article III, these plaintiffs lack standing to invoke our jurisdiction.

In February 2019, the Court issued a temporary stay of a lower court order that blocked Act 620, the Louisiana law that was sponsored by Democrat lawmaker Katrina Jackson and adopted in 2014. Under the legislation, abortionists were required to have admitting privileges at a hospital within a 30-mile radius in order to provide continuity of care should a woman need emergency treatment as a result of an abortion.

A Louisiana federal district judge cited the Supreme Court’s 2016 decision in Whole Woman’s Health v. Hellerstedt (WWH) in the opinion that Act 620 violated a woman’s constitutional right to abortion as invented by the Court in the 1973 landmark case of Roe v. Wade.

A panel of the U.S. Court of Appeals for the Fifth Circuit reversed the lower court’s decision, and the full court denied the abortion providers’ petition to rehear the Louisiana case.

Lawyers for the abortion providers subsequently applied to the U.S. Supreme Court for an emergency stay while they prepared their petition for the Court to hear their case.

The Supreme Court granted the stay, 5-4, with Chief Justice John Roberts siding with the liberal wing of the Court, and Justices Clarence Thomas, Samuel Alito, Neil Gorsuch, and Brett Kavanaugh dissenting. The stay was to last only until the Court received a petition to hear the case and voted on it.

Catherine Glenn Foster, president of Americans United for Life, said in a statement the Court’s decision “strengthens abortion businesses at the cost of women’s lives”:

Abortion has so warped the identity and goals of the Court that they were willing to prevent communities from protecting women from receiving a substandard level of healthcare. While the Court may still be stuck in 1973, reluctant to give up its place at the center of the debate over life in America, the fact that the Court even heard this case is an impressive sign of the vitality and dynamism of the cause for life.

“Across our great nation, life-affirming protections are being signed into law at a rate unseen in a generation, and Americans are turning away from abortion in principle and in practice in the greatest numbers seen since before Roe,” she added. Passion and truth are on the side of life.”

National Institute of Family and Life Advocates President Thomas Glessner also said in a statement, “Women seeking abortions have the same right to competent and quality care as patients involved in other surgical procedures.”

“This ruling allows the loophole enjoyed by abortionists to remain open at the expense of the women the abortion industry claims to serve. All states, including Louisiana, have an interest in regulating abortion and a duty to protect women,” he said. “Unfortunately, today’s SCOTUS decision denies this critical principle.”