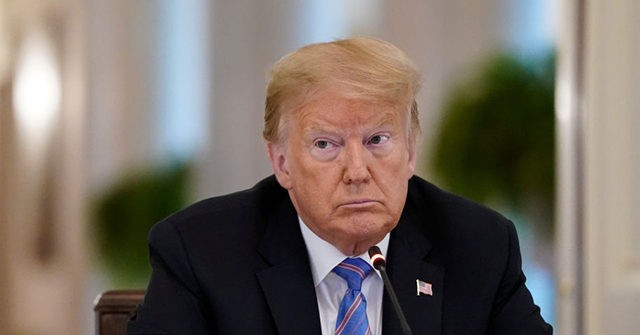 President Trump on Sunday cautioned against universal vote-by-mail while defending absentee voting — which he said is safer due to the “process” — warning that “bad things happen” with mail-ins and pointing to the recent voter fraud scheme involving Democrats in New Jersey.

“Absentee Ballots are fine. A person has to go through a process to get and use them,” explained Trump, who has received criticism from Democrats for utilizing absentee voting himself.

“Mail-In Voting, on the other hand, will lead to the most corrupt Election is USA history. Bad things happen with Mail-Ins,” he warned. “Just look at Special Election in Patterson, N.J. 19% of Ballots a FRAUD!”

Absentee Ballots are fine. A person has to go through a process to get and use them. Mail-In Voting, on the other hand, will lead to the most corrupt Election is USA history. Bad things happen with Mail-Ins. Just look at Special Election in Patterson, N.J. 19% of Ballots a FRAUD!

“But I will tell you if you saw the Republican playbook on voter suppression, you would see that there is a plan here that says we’re afraid of the vote, we’re going to do everything we can to limit it,” Pelosi said during a June appearance on CNN’s Newsroom.

The charges allege that Jackson violated state election laws when he collected mail-in ballots from voters in recent city council elections and delivered them to the Passaic County Board of Elections. Jackson, according to the charges, did not identify who he was when he dropped off the ballots and in one case took an unsealed ballot that had not been filled out and delivered it sealed to the Board of Elections.

Khalique and Razyen were also charged with third-degree fraud in casting mail-in votes, among other charges.

“The charges come as Paterson’s all mail-in ballot election was allegedly rife with fraud. Grewal confirmed that almost 20 percent of the mail-in votes cast were thrown out by the Board of Elections,” as Breitbart News reported.

A spokesperson for the Northeast region of the U.S. Postal Service assured residents that they alerted the Morris County Board of Elections “to enable the eligible residents to receive replacement vote-by-mail ballots.”

While Democrats point to the Chinese coronavirus as a primary reason to embrace mail-in-voting, it has not been justifiable. Wisconsin held its in-person primary April 7, at what some say was the peak of the pandemic. Out of over 400,000 who either worked the polls or voted, 52 later tested positive for the virus. Additionally, several of those individuals indicated other ways they could have been exposed.

“So, now we have a mail-in thing, and you see California, he’s sending out millions and millions of ballots, where are they going? Where aren’t they going? Is the postman going to hand them out? Are they going to take them out of the mailboxes?” he asked, warning of foreign country interference:

The other thing…that’s very important, you get a foreign country, they keep talking, oh Russia or China, especially China, not Russia, especially China, are they going to print millions of ballots using the exact same paper, using the exact same machines, and are they going to print ballots and then hand them in and all of a sudden –? It’s the biggest risk we have, the mail-in ballot, not so much the absentee ballot. Because in absentee, like I’m in the White House, I’m going to have to vote in Florida, etc., you’re absentee, it’s okay. But people go through a process for that. You know, they — it’s really pretty good.

“But the mail-in ballots, they mail them to anybody and they send them out by the millions. I think I read over 30 million ballots are going to be sent out in California,” he added. “Where are they going? Nobody’s standing there watching you vote.”