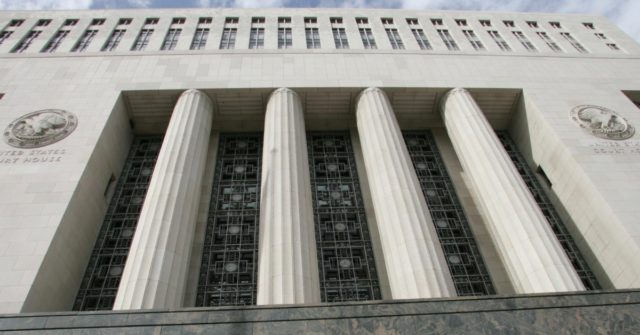 U.S. District Judge Cormac J. Carney has stepped down as Chief Judge of the Central District of California because he complimented a black court official for being “street-smart.”

Carney will remain a judge, but will yield his senior post as leader of the country’s largest federal court jurisdiction.

The Los Angeles Times reported Sunday that Carney, a George W. Bush appointee, had attempted to praise court executive and clerk Kiry K. Gray, who has worked for the court for 35 years.

Carney was addressing a webinar organized by the local bar association, and commented on the vandalism of courthouses by the Black Lives Matter movement:

During the webinar, Carney gave an overview of his vision for his time as chief judge and discussed the protests and vandalism in several cities across the nation following the killing of George Floyd by a Minneapolis police officer.

“It’s been sad, quite frankly, seeing our courthouses vandalized with graffiti,” Carney said in the webinar.

When Carney began discussing his adjusting to the role of chief district judge, his comments turned to Gray.

“Fortunately for me, we have just a fabulous clerk of the court in Kiry Gray. She’s so street-smart and really knows her job,” Carney said.

When people complained, Carney first tried to justify his use of the phrase, the Times reported:

To me, the term means a person of great common sense, initiative, and ability to work with people and get things done. It saddened me greatly to learn that some people view the term to be demeaning to people of color. I never knew that there was a different definition of the term.

He later resigned from his post as Chief Judge in a e-mail, according to the Times:

I have apologized to Ms. Gray, but I have concluded that a simple apology will not put this matter to rest. There will be division in the Court, unnecessary, negative and hurtful publicity, and a diversion from the Court’s essential mission of administering justice if I were to continue serving as the Chief District Judge.

Carney will remain in his post as an ordinary judge, which is a lifetime position.