Kylie Jenner is reminiscing about what she says her figure used to look like pre-quarantine.

The 22-year-old “Keeping Up With the Kardashians” star alluded to such in a throwback video shared to her Instagram Stories on Sunday in which she posted the flick of herself donning a two-piece bikini.

“OK, cutting off these quarantine pounds starting tomorrow,” the makeup mogul captioned the clip from January. 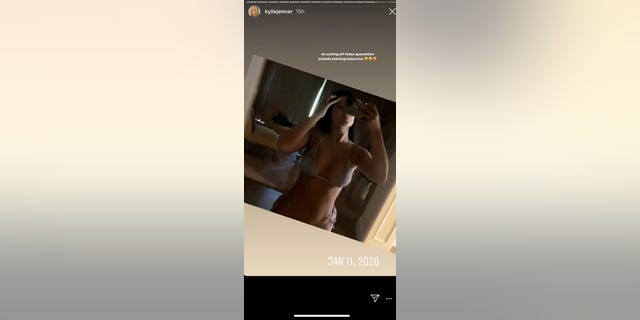 Over the weekend, the Kardashian-Jenner clan rang in Khloe Kardashian’s 36th birthday at Jenner’s posh $36.5 million estate in the lavish Holmby Hills neighborhood of Los Angeles.

Last month, Forbes published an explosive report insisting Jenner isn’t really a billionaire and alleged she faked numbers about her net worth and her company’s financials.

The publication’s claims came nearly one month after it released its annual World’s Billionaires list, reporting that the 22-year-old’s makeup empire was valued at $1.2 billion.

The outlet accused the Kylie Cosmetics founder of previously “inflating the size and success of her business” to the publication “for years” in order to appear richer than she really is.

Meanwhile, the family is also still riding high on the reported news of Kanye West’s Yeezy 10-year partnership deal with Gap which he’s said to have finalized on Friday for undisclosed terms.

The deal, which can be revisited and renewed after five years, is anticipated to generate some $1 billion in annual sales for the Gap brand that had already seen a global revenue figure of $4.6 billion last year.