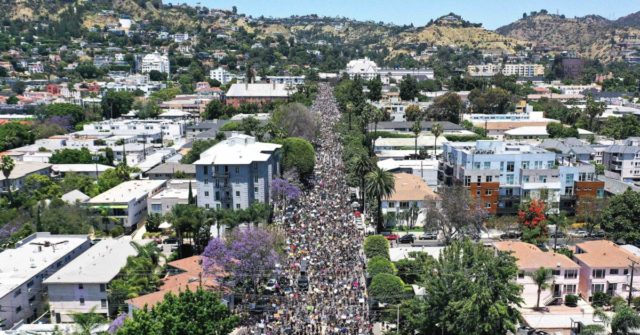 Los Angeles County may run out of hospital beds in the next two to three weeks because of a new surge in coronavirus infections dating to the period in which Black Lives Matter protests broke out.

Last week, L.A. County Public Health Director Barbara Ferrer said that it was “highly likely” that a new spike in cases was partly related to the protests and riots, in which tens of thousands of people filled crowded streets.

Earlier this month, there were also massive crowds in Los Angeles and other major cities for LGBTQ Pride rallies that doubled as Black Lives Matter (or “Black Trans Lives Matter”) protests. Attendance at L.A.’s parade in West Hollywood June 14 was estimated at 30,000.

While some people wore masks, few precautions for social distancing were observed carefully — including by politicians in attendance.

On Monday, Ferrer warned of “alarming increases in cases, positivity rates and hospitalization,” the Los Angeles Times reported, with the county projecting that it could run out of spare hospital beds in two to three weeks.

“The increase in transmission likely occurred sometime around the week of Memorial Day week or shortly thereafter,” the Times noted, blaming the re-opening of businesses, including bars.

“Half of the restaurants visited by county inspectors are not complying with the new rules, and officials have seen examples of overcrowding at public spaces,” the Times noted.

The USNS Mercy, one of the U.S. Navy’s two hospital ships, docked in L.A. in early spring to help deal with an anticipated shortage of hospital beds earlier in the coronavirus pandemic. It left in mid-May after treating only 77 patients.