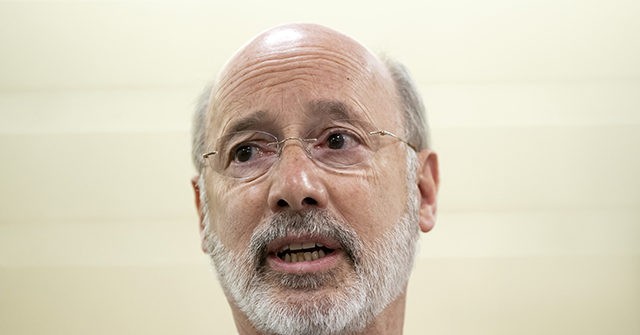 Pennsylvania Gov. Tom Wolf, a Democrat, has suffered a significant drop in his approval rating during his continued slow-walking of the reopening of his state as the coronavirus pandemic recedes.

The 43-percent swing against Wolf’s approval rating comes in just a couple months. Back in April he was riding high as the pandemic raged through his state and across the country, but Pennsylvanians have turned against him in a big way since then.

While Wolf is still at a 49 percent approval rating now, according to the latest survey from Susquehanna Polling and Research in conjunction with local Fox affiliate Fox43, that is a 19-percent drop from his April approval rating of 68 percent.

“The shift, when combined with disapproval numbers, is a 43 percent tilt over two months,” Fox43’s Matt Maisel wrote.

Wolf’s handling of the pandemic was praised at the beginning, but after issuing an order similar to one from New York Democrat Gov. Andrew Cuomo that forced nursing homes to admit positive coronavirus patients, even if they were unable to do so, he like other Democrat governors has seen his popularity decline significantly. In addition to the flawed nursing home policies, the continuation and extension of lockdowns—Wolf was one of the slowest governors nationwide to reopen his state and has faced immense criticism for the lockdown in the Keystone State—has toppled his once-high-but-now-falling approval rating.

This same survey also shows presumptive Democrat presidential nominee former Vice President Joe Biden slipping somewhat since the April survey, dropping two percent from 48 percent then down to 46 percent now. President Donald Trump, the incumbent Republican running for re-election, also dropped a percent from 42 in April down to 41 now. Despite both Trump and Biden slipping slightly, the margin between them has also shrunk from 6 percent then to just 5 percent now.

The survey also oversampled Democrats, according to the local news outlet, meaning that Wolf and Biden both likely fare better in this poll than in reality.

“The survey polled 715 voters statewide, 49 percent of which were registered Democrats, and 42 percent were Republican,” Maisel wrote. “However, of those polled, nearly a quarter identified their voting habits were more closely aligned with being an Independent.”

The survey, conducted from June 15 to June 23, also found that voters believe that the economy is by far the most important issue and that they trust Trump more than Biden when it comes to that by a large margin. Maisel quoted Jim Lee, the president and CEO of Susquehanna Polling and Research, saying if this election is focused on the economy, then Trump can come roaring back from the lull he is currently in. “If this becomes an economy pocketbook election, you can’t rule Donald Trump out because, on the key issue most voters care about, he’s winning among jobs voters,” Lee said.