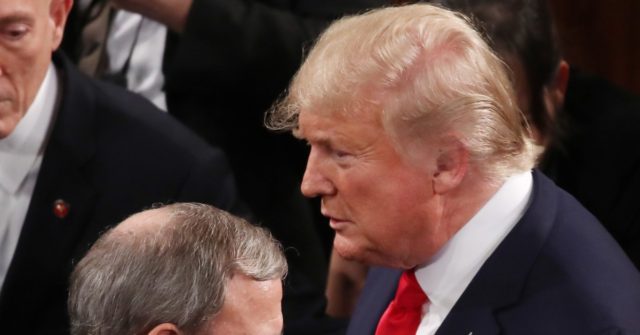 Many conservatives voted for President Donald Trump in 2016 solely because the fate of the Supreme Court was at stake. They will have to do so again in 2020, because the Court remains liberal, and Democrats want to pack it further.

Nominally, conservatives have a 5-4 majority, if the only consideration is the party of the president who nominated them. But Chief Justice John Roberts has repeatedly sided with the Court’s liberals, from the Obamacare decision until today.

In the last two weeks alone, Roberts has sided with the liberals in the LGTBQ discrimination case; the case blocking President Trump from rescinding DACA (for now); and now, on Monday, a case striking down a Louisiana abortion law.

Though President Trump has nominated two justices, Neli Gorsuch and Brett Kavanaugh, to the Court, they have been unable to affect the outcome in these cases — and Gorsuch actually joined Roberts and the liberals on one occasion.

Recall that it was Roberts who offered a rare public comment in 2018 rejecting the president’s description of “Obama judges” and “Trump judges.”

Trump was right, of course. But Roberts was making the case for his own defection.

Instead of a conservative Court, we have a liberal one. And until a Republican president can replace one or more of the current liberal justices, the Supreme Court will continue the Obama-Biden project of “fundamental transformation.”

The next four years could offer opportunities to replace Justices Stephen Breyer (81) and Ruth Bader Ginsburg (87), assuming the other justices remain healthy. A Democrat president would re-stock the liberals with younger justices.

But that is not all Democrats want to do. Liberal groups have already announced plans to push the next Congress and administration to expand the Supreme Court to at least 11 justices, and pack the new vacancies with liberals. They can do so with a simple law passed by a majority of both Houses of Congress; no constitutional amendment is needed.

And with Democrats already talking about removing the filibuster completely, they could pass whatever they wanted — including any changes to the structure of the courts — through a Democrat-controlled Senate, which they could create in perpetuity merely by passing the bill for D.C. statehood that the House already passed on party lines last week.

Therefore the 2020 election is just as much a fight about the future of the Supreme Court as 2016 was. Liberals still hold an effective majority on the Court, and want to increase it. The only way to fight that is to re-elect President Trump.