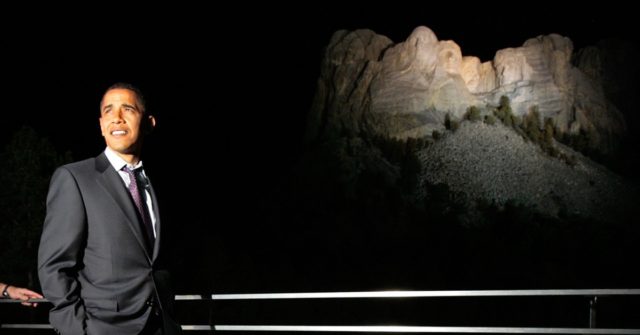 CNN described Mount Rushmore as a “monument of two slave owners” on “land wrestled [sic] away from Native Americans” ahead of President Donald Trump’s visit there on Friday.

But in 2008, CNN marveled at the landmark when then-Sen. Barack Obama (D-IL) visited Rushmore on the campaign trail.

Fascinating how CNN called Mount Rushmore “majestic” and “quite a sight” in 2008 when Obama visited, but now its a symbol of slavery and stolen landhttps://t.co/3sV1ZEfW9L https://t.co/GTIH9tzOim pic.twitter.com/5Vu6uQp4XS

In 2008, CNN anchor Ron Marciano said: “Barack Obama is campaigning in South Dakota. That state’s primary is Tuesday. Obama arrived there late last night and got a good look around Mt. Rushmore — it’s quite a sight if you haven’t seen it.”

Fellow anchor Betty Nguyen added: “Barack Obama is in South Dakota today. He arrived there last night. Take a look at this. He got a good glimpse of the majestic Mount Rushmore. Well, South Dakota and Montana have closed out the primary season on Tuesday.”

But on Friday, CNN described Rushmore in less glowing terms.

[A]t a time of racial unease, when protesters are tearing down statues of slaveholders and calling for the names of Confederate generals to be removed from army bases, the Rushmore event is a reminder that Trump is fighting to preserve these relics of heritage and history that some see as symbols of oppression. And to indigenous people, Mt. Rushmore, with four white presidents, two of whom were slave owners, is one of those symbols.

I think that is a source of concern for people that see this certainly within a state with a Native American population nearly 10 percent and much higher in Rapid City, concerned about a place that has a lot of spiritual significance, And historical significance when you look at what they and most historians consider to be broken promises and broken treaties.

CNN correspondent Leyla Santiago reported on The Lead with Jake Tapper: “President Trump will be at Mt. Rushmore where he’ll be standing in front of a monument of two slave owners and on land wrestled away from Native Americans told that be focusing on the effort to, quote, tear down our country’s history.”

Pursuant to the new moral stricture promulgated this week by the NYT & CNN — that Mount Rushmore is a shameful monument to racism and white supremacy — both CNN and Bernie Sanders ought to repent for this praise they jointly heaped on it in 2016:pic.twitter.com/0MRNO2PJ2j