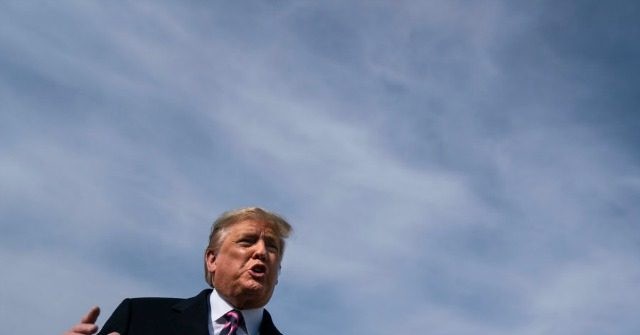 Trump and South Dakota Governor Kristi Noem (R) have been ripped for not requiring masks and social distancing at the event. Activists are also protesting the existence of Mount Rushmore, saying it was built on stolen land by a KKK sympathizer, and warning that the fireworks show (the first since 2009) could cause wildfires.

9:45 PM: At the top of the hour, Trump is expected to deliver remarks that “will tell the truth about America’s history” and go after the “left-wing mob.” Trump has landed at Mount Rushmore.

Pres. Trump is almost in South Dakota — but first a flyover from Air Force One pic.twitter.com/dNFcPED9XG

It’s a packed house out here — at least on the lower deck area https://t.co/ZSTywnQDgg pic.twitter.com/PcpR2FARWb

Though tonight’s fireworks at Mt Rushmore is drawing criticism from those fearing damage to surrounding forests and the monument itself, Pres Trump says “Mt. Rushmore’s in great shape and it’s gonna be in great shape for centuries to come.” Says he’s looking forward to the event. pic.twitter.com/6g1VeIn6Vv

@govkristinoem awaits the arrival of Air Force One at Ellsworth. pic.twitter.com/n821npXUzC

I’m walking back through Keystone and people are lined up on the side of the road. They’re cheering as law enforcement vehicles leaving the protest drive by. pic.twitter.com/c1sTv8a13I

We are reporting #live where #Indigenous activists have been asserting their land rights under the 1868 Fort Laramie Treaty, blocking the road to #MountRushmore before a scheduled Trump/Pence rally there.https://t.co/85zAougclX

Law enforcement from several agencies are trying to clear the roadway in Keystone. People Re being warned that tear gas is imminent. pic.twitter.com/koi3GHyTVx

The vehicles are being towed. I personallly witnessed one PCSO deputy pepper spray protesters. Another reporter said she saw 3-4 deputies do it. 10+ protesters got sprayed and had to wash their eyes out. pic.twitter.com/QBRik4dw6J

National Guard moved past van blockade and now there is one group of protestors with a line of military on either side pic.twitter.com/qBnsgKRK2Y

Protestors had moved off the road and into the hill to get away frm the line of national guard. I can see at least two armed and armored national guardsmen have appeared above them on the hill pic.twitter.com/aADdk31jAG

Protestors remaining that did not retreat to the hills, etc pic.twitter.com/b3UaF6uJy0

Indigenous protesters at Mount Rushmore (sacred Lakota land) have removed the tires from the large white vans in the background, creating a road block that will be very difficult to move.

The National Guard is here pic.twitter.com/dAUjyOf4m9

An Indigenous protester yells “go home you immigrant” at a car driving by on its way to Mount Rushmore.

A large protest has gathered at the roadblock in front of the path up to Mount Rushmore. pic.twitter.com/xpUnbCmbKg

My view at the protest. I was on the inside of the police line but was told to back up several times. Most media seems to be out with me, some people with cameras are still inside the police line. pic.twitter.com/vCWjP7NaEF

A more intensive vehicle blockade has also gone up, blocking the road to Trump’s event in South Dakota. Indigenous people gathered here are invoking their unceded rights to the land – police preparing to make arrests.

Image: vehicles, #Indigenous demonstrators block the road. A sign reads, “You Are On Stolen Land”

Our field correspondent reporting state troopers have given 1 verbal warning so far. Officers have metal handcuffs.

Many #Trump supporters are waiting to get through the roadblock. pic.twitter.com/H9dDrWEuco

Getting tested for COVID-19 at Mount Rushmore in advance of the President’s arrival. pic.twitter.com/vJbwxSumtG

In case of an emergency, like a fire or a storm or anything that would cause people to quickly move out, the ties ensure that the chairs will not be easily knocked over or fly into egress paths. Additionally, the tied chairs then cannot be used as a weapon, per the official.

Mount Rushmore is a racist and colonialist symbol that was carved into land brazenly stolen from my ancestors.https://t.co/7vRO1JBxOF

Oglala Sioux Tribe Pres. Julian Bear Runner says President Trump’s planned fireworks display at Mount Rushmore before Independence Day is “not just a threat to my people, but it’s a threat to the land and it’s a threat to mankind,” due to COVID-19.https://t.co/h488r3bmDt

“When you carve out four white men who were colonizers, who committed genocides against indigenous people … and for that to be okay in society today is fundamentally wrong.” pic.twitter.com/mrnM4RJgpC

Julian Bear Runner, president of the Oglala Sioux tribal council: “The lands [Trump’s] about to visit belong to the Great Sioux nation … and I have to tell him he doesn’t have permission from its original sovereign owners to enter the territory.”https://t.co/WYYypT331X

Trump has no right to go on Sioux nation lands to Mount Rushmore. He should instead ensure First Nation indigenous people have what they need to fight COVID-19 & stop corporations from stealing & drilling on holy lands.

Lakota tribal leader calls for the removal of Mount Rushmore- a monument that is on Lakota land and was carved by Gutzon Borglum, a member of the Klu Klux Klan.

It’s been powerful seeing racist memorials pulled down in towns around the states, but imagine taking it up a notch.. pic.twitter.com/5LNnYN6rGe

Native tribal leaders are calling for the removal of Mount Rushmore https://t.co/YlRciVdlWX pic.twitter.com/DKpZyIKwPV

The man who sculpted Mount Rushmore, Gutzon Borglum, had ties to the KKK.

“He was on Klan councils. He met with them. He had lots of friends with them,” historian John Taliaferro says. https://t.co/Q9c56s54oQ