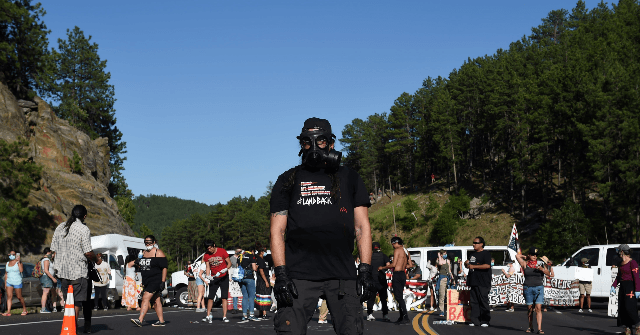 Protesters have reportedly blocked the main road leading to Friday night’s Independence Day celebration at Mount Rushmore with disabled vehicles, lining up vans and standing in the road holding signs reading, “You Are On Stolen Land” and “Sacred Sites Over National Monuments. Give It Back.”

Photos and videos show demonstrators blocking the road,  Highway 16A, with vans, some of which had flattened — and physically removed — tires:

Tires removed from vans creating physical barriers as they can no longer be driven. pic.twitter.com/b74hWLj3VW

Protesters have blocked the highway with vans pic.twitter.com/8mt39n3aNN

Image: vehicles, #Indigenous demonstrators block the road. A sign reads, “You Are On Stolen Land”

Our field correspondent reporting state troopers have given 1 verbal warning so far. Officers have metal handcuffs.

Many #Trump supporters are waiting to get through the roadblock. pic.twitter.com/H9dDrWEuco

A second arrest warning has been given. Police claim that demonstrators will be allowed to return to their original protest location.

National guard soldiers are approaching the blockade. We are #live https://t.co/iVEoebuZa1

According to the Argus Leader, authorities declared the protest an unlawful assembly around 4:30 p.m. MT:

It has officially been declared an unlawful assembly by law enforcement over a megaphone. The are demanding to vacate the premises immediately or the protestors will be arrested

“Police are demanding protesters vacate the premises or they will be arrested. At 5:15 p.m. MT, at least one person had been arrested, but the road was still blocked,” the newspaper reported.

The National Guard is reportedly on the scene:

The National Guard is here pic.twitter.com/dAUjyOf4m9

A warning from police: pic.twitter.com/peK1S6hLiu