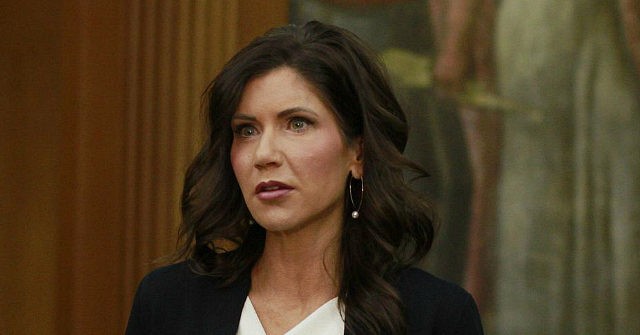 South Dakota Gov. Kristi Noem (R), in a speech during the Mount Rushmore Independence Day celebration, defended America’s founders against what she said was an “organized, coordinated campaign” to eliminate them from history.

“Across America these last several weeks, we have been witnessing a very troubling situation unfold,” she said.

“In real-time, we are watching an organized, coordinated campaign to remove and eliminate all references to our nation’s founding and many other points in our history. Rather than looking to the past to help improve our future, some are trying to wipe away the lessons of history — lessons that we should be teaching our children and our grandchildren,” she said.

She added, “This approach focuses exclusively on our forefathers’ flaws and fails to capitalize on the opportunity to learn from their virtues. Make no mistake, this is being done deliberately to discredit America’s founding principles by discrediting the individuals who formed them so that America can be remade in a very different political image.”

America’s independence was a result of many stars aligning, including a unique assembly of powerful writers, gifted thinkers, and tremendous generals.”

“They were supported by a simple, citizen army that defeated the world’s most powerful empire,” she said:

These men did not stage a revolt against the Kingdom of Great Britain for personal gain or for personal power. They did it because they knew they had to in order to defend their rights to live and work and worship as they saw fit. Following the British defeat, we could have had a king, but instead, we had a man who walked away from his position as commander-in-chief, and then also from the presidency.

She quoted the Declaration of Independence:

We hold these truths to be self-evident, that all men are created equal, that they are endowed by their creator with certain unalienable rights, that among these are life, liberty and the pursuit of happiness. That to secure these rights, governments are instituted among men, deriving their just powers from the consent of the governed.

“Our Founders had their flaws, certainly, but to use those flaws to condemn their ideals is unjust and self-defeating,” she said. “We can speak and write, worship, work, defend ourselves, and even protest as we see fit — because of these men and their ideals. To attempt to ‘cancel’ the founding generation is to attempt to cancel our own freedoms.”

She said people all over the world continue to flock to America today due to the ideals laid by the country’s forefathers.

She urged those on the political frontlines to remember the words of Theodore Roosevelt:

It is not the critic who counts; not the man who points out how the strong man stumbles, or where the doer of deeds could have done them better. The credit belongs to the man who is actually in the arena, whose face is marred by dust and sweat and blood; who strives valiantly; who errs, who comes short again and again, because there is no effort without error and shortcoming; but who does actually strive to do the deeds; who knows great enthusiasms, the great devotions; who spends himself in a worthy cause; who at the best knows in the end the triumph of high achievement, and who at the worst, if he fails, at least fails while daring greatly, so that his place shall never be with those cold and timid souls who neither know victory nor defeat.

“You’d be hard-pressed to find a more appropriate quote to guide leaders today. Leadership requires wisdom, a will to act, and the confidence to stand up for what is right. Our love for America and our commitment to stand for the principles that make America unique deserves to be applauded,” she said.

She introduced President Donald Trump as someone who “understands precisely what it means to brave the dangers of the arena.”

“Someone who strives valiantly; who knows great enthusiasms; who spends himself in a worthy cause, and who has firmly and repeatedly stated his commitment to place Americans, American liberty, American safety, and the American Constitution before anything else,” she said.

Noem said that over just three days, more than 125,000 people tried to get tickets to the event.

Trump is the first president since George H.W. Bush in 1991 to attend an Independence Day celebration at Mount Rushmore. The event comes as leftists have tried to topple or deface historical statues and monuments across America.