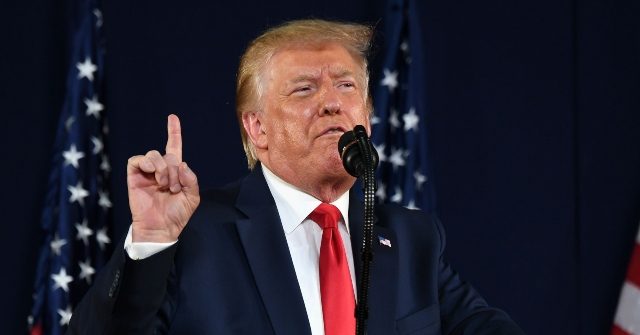 During Friday’s address at Mount Rushmore’s Independence Day celebration, President Trump said the radical left’s goal is “not a better America, their goal is to end America.”

“Those who seek to erase our heritage want Americans to forget our pride and our great dignity so that we can no longer understand ourselves or America’s destiny,” Trump told the crowd in front of the American landmark Friday evening.

Rather than striving for a better America, Trump said those who seek to destroy the country’s heritage “want power for themselves.”

“But just as patriots did in centuries past, the American people will stand in their way, and we will win and win quickly and with great dignity,” the president said.

We will never let them rip America’s heroes from our monuments or from our hearts. By tearing down Washington and Jefferson, these radicals would tear down the very heritage for which men gave their lives to win the Civil War, they would erase the memory that inspired those soldiers to go to their deaths, singing these words of the Battle Hymn of the Republic, “As he died to make men holy, let us die to make men free, while God is marching on.” They would tear down the principles that propelled the abolition of slavery and ultimately around the world ending an evil institution that had plagued humanity for thousands and thousands of years. Our opponents would tear apart the very documents that Martin Luther King used to express his dream and the ideas that were the foundation of the righteous movement for Civil Rights.

Trump added that they would “tear down the beliefs, culture, and identity, that have made America the most vibrant and tolerant society in the history of the earth.”

“My fellow Americans, it is time to speak up loudly and strongly and powerfully and defend the integrity of our country,” he urged as the crowd shouted, “USA!”

“It is time for our politicians to summon the bravery and determination of our American ancestors. It is time,” he continued.”It is time to plant our flag and to protect the greatest of this nation, for citizens of every race, in every city in, every part of this glorious land.”