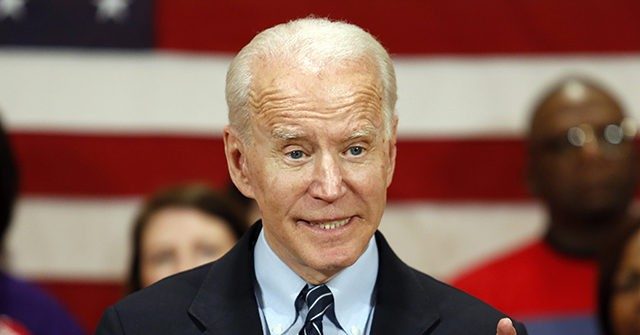 After six weeks of shamelessly exploiting the tragic death of George Floyd for his own personal, political fortune Mr. Biden has finally identified the source — the very headwaters — of White Privilege in America. He found it in the mirror.

Everybody knows Mr. Biden has been part of the problem in Washington for 47 years. Yet in the greatest display of insufferable, patriarchal, mansplaining White Privilege, Mr. Biden now claims that he alone is the savior America needs right now.

According to him, America today is a systemically racist, unfair hellhole where justice dies at the hands of murderous cops and evil, hate-filled citizens — citizens who just happen to support his political opponent.

“We remain locked in the battle for the soul of this nation,” he intoned last week. In other words, a battle between racist supporters of President Trump versus the pure and virtuous woke warriors rioting in the streets, killing cops, firebombing buildings and ripping down statues, supposedly in the name of George Floyd.

But, how did we get here, Mr. Biden? You have been in power longer than just about anybody else alive. You were in the United States Senate for more than 35 years. You fondly recall yukking it up with racist segregationists in your own party for decades.

For 47 years, you have been at the highest echelons of power. You were chairman of two of the most powerful committees in Congress, one of which gave you unrivaled authority to shape the federal judiciary.

In your final eight years of power, you were in the White House. There you served as the wise elder statesman over the executive branch of government — a post you want voters to return you to. Such White Privilege.

Most troubling of all, why should anyone expect you to fix a mess that you have either ignored or proved yourself incapable of fixing during the 47 years you have lorded over every branch of the federal government? Sheer, unadulterated White Privilege.

Turns out that in the 47 years that Mr. Biden has presided in Washington, he was just clearing his throat. Just warming up.

Is there any more grating and obnoxious display of patriarchal White Privilege than the constant clearing of one’s throat? It is what powerful, old white men do when they have nothing to say — they have no answers — but they sure don’t want anyone else to speak up.

But that’s Joe. Oblivious as ever.

One of his most famous star turns in the Swamp came in 1991 when he led the “high tech lynching” of Supreme Court nominee (now Justice) Clarence Thomas. You see, Justice Thomas did not think and talk the way Mr. Biden thought a black man should think and talk.

Then along came Anita Hill, who leveled unfounded accusations of a sexual nature against Justice Thomas. Well, this being a sensitive area for Mr. Biden, he decided that Ms. Hill didn’t tell the kind of story he wanted to hear from a black woman.

This put Mr. Biden in a bit of a high-profile pickle. So, he bungled the whole thing and made everybody mad.

Justice Thomas got confirmed without the support of Mr. Biden, the Judiciary panel chairman, but only after suffering the most despicable, underserved and dishonest smears in judicial nomination history. Up to that point, anyway.

Ever since then, Mr. Biden has been getting everything wrong. Especially in the area of his supposed greatest expertise: foreign policy.

He voted for war in Iraq, before changing his mind (after American troops died, of course). Then he wanted to spend more U.S. troops splitting Iraq into three countries, before everybody laughed him out of the room. He was for the war in Afghanistan — before he was against it.

Oh, and he was the lone dissenter in the Situation Room against killing Osama bin Laden.

That’s right, Vice President Joseph R. Biden Jr. was quicker to send U.S. troops to die in Iraq and Afghanistan than he was to kill Osama bin Laden.

And this guy has been hailed as a reigning expert on foreign policy in Washington for a half-century? You cannot make this up.

And now he wants to be Commander-in-Chief? Suffocating White Privilege.

It is from this rotten core that inspires White Privilege Joe to actually say out loud that black people are not really black if they do not vote for him. Just ask Justice Clarence Thomas.

Joe Biden is so dumb and so marinated in his own White Privilege that he actually thinks he earned it. After all, he had run for president repeatedly and never got better than 2% — until Mr. Obama snatched him from the dustbin of history (and from the old folks home).

This is where Joe Biden’s olympian White Privilege gets even crazier.

Joe Biden’s campaign is not just an attack on America in the wake of Mr. Trump. It is an attack on the America that Mr. Obama left behind.

Even after eight years of Mr. Obama fixing things, America is still a systemically racist hellhole, according to Joe Biden.

• Charles Hurt is opinion editor of The Washington Times. He can be reached at churt@washingtontimes.com or @charleshurt on Twitter.