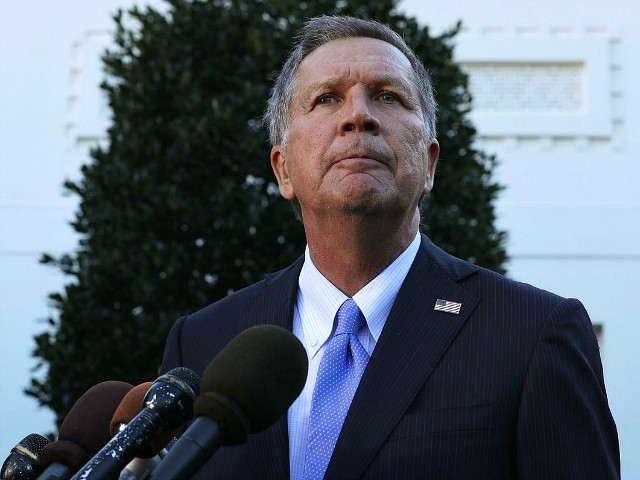 When asked about Trump’s lowering poll numbers, Kasich said, “I kind of think she’s jumped the shark. That’s ‘Happy Days’ when Fonz jumped the shark, and that was about the end of the show. I’ve been saying that I think he has jumped the shark. People wanted him to mix it up. They said, let’s take a chance on this guy. This is about our families. It’s about our kids going back to school. It’s about mom and dad. It’s about grandma, grandpa. The guy won’t wear a mask. We’re behind the curve on all this. He’s dismissing it. When you do that, you are now messing around with people’s lives, and people don’t like that.”

He added, “So, you can see the Republicans beginning to retreat, and we see independents retreating in mass. It’s a very hard thing to fix. It’s never over until it’s over. As Yogi said, it ain’t over till it’s over. But at this point, losing all these people, including increasing numbers of the religious faithful is very, very difficult. It’s a very tough thing to dig out of.”

Burnett said, “The president’s canceled his New Hampshire rally. He’s cited storms from Tropical Storm Fay. The weather forecast shows the storm will be past where the rally is by the time it was scheduled to start tomorrow. It comes as Kellyanne Conway downplayed crowd expectations. They recently canceled a rally in Alabama. In Tulsa, they were stuck with photos of a pretty empty stadium. Does this all say anything to you?”

Kasich said, “Yeah, he’s losing momentum. The thing about Tulsa that was interesting, Erin — I just saw a few of the clips. You saw people looking at their watches, and people were yawning and reaching across. And I would say four years ago, people were kind of transfixed by this show. But the show’s kind of — the show’s winding down. They canceled because they weren’t going to get the crowd. New Hampshire is such an interesting place. I’ve spent a lot of time up there. I did 115 town hall meetings. People are very independent, and they’re not looking on this favorably if had terms of what he’s done with corona and what he’s done with the virus, uh, not the virus, the protests. That’s another thing he’s missed. Both virus and the protests, strike two.”