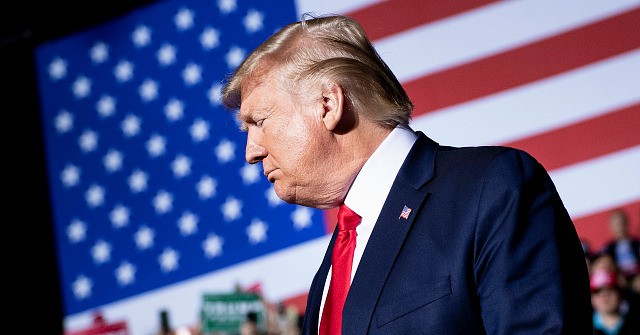 Majewski has turned his Bay Township home’s yard red, white and blue once again. Last year, he painted a massive “Betsy Ross” American flag in honor of our troops. But this year, Majewski turned every inch of it into a Trump 2020 “Keep America Great” banner.

The ambitious homeowner originally intended to paint the National League of Families POW/MIA flag across his lawn, but ran into trouble with the massive amount of black paint required. Instead — and encouraged by local veterans — Majewski turned approximately 120 gallons of biodegradable chalk-based blue paint into a beacon of support for the POTUS.

“You see and hear a lot from the president on his support of the military. New weapons, new equipment, new technology — all of those things matter,” he told the Port Clinton News Herald. “I think as a veteran, it’s highly appreciated.” He seems to be right: Ottawa County Republican Party and state Representative Douglas Swearingen of the 89th District offered his approval when he visited the site of Majewski’s ambitious yardwork.

Majewski has put signs around his yard, reminding people that he can be friends with anyone, not just other Trump supporters. It seems to have been unnecessary. “We do not have to be vicious to one another; that’s what’s dividing us right now,” he said. “Not that I wanted it, but I did anticipate a little bit more friction. But there has been absolutely none.”

Moreover, it seems that much of the community is enjoying his work. “We’ve had a really good turnout,” Majewski said. “A lot of my neighbors have come by and I’ve had a lot of positive feedback.”