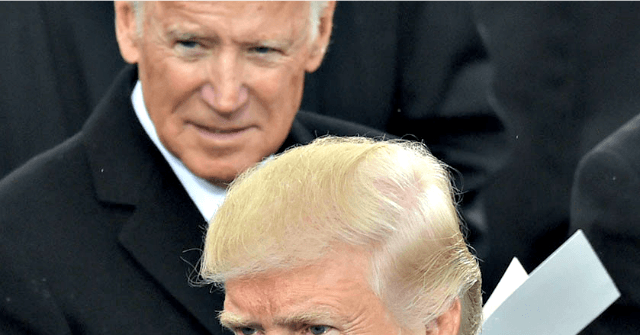 The poll of 1,500 likely voters conducted between July 1 and July 3 showed that Trump and Biden each receive 47 percent of the national popular vote, with only six percent undecided.

The results differ dramatically from those of the presidential matchup polls featured in the Real Clear Politics Average of Polls, which currently show Biden leading Trump by nine points.

Breitbart News asked Democracy Institute founder and executive director Patrick Basham to explain why the results of the Democracy Institute/Sunday Express poll show a tie between Trump and Biden while other current polls show Biden on the edge of a double digit lead.

“In 2016 we released a poll that showed President Trump defeating Democratic nominee in the Electoral College, and tied with her in the popular vote. Then as now we think we’ve identified the shy Trump vote,” Basham said of the Democracy Institute’s polling in 2016 and 2020.

Basham, who is in charge of the poll’s questionnaire and survey design, added:

It’s exactly a bigger deal now than it was last time. We’ve identified a ‘low burn’ reaction among Trump supporters who’ve seen public shaming of those who support the president. Ever since the May protest riots many Trump supporters are simply unwilling to face the risk and public ridicule of telling even an anonymous person on the phone they plan on voting for the president.

He went on to explain that more probing questions revealed the “shy Trump voter.” He explained:

We asked a number of undecided voters more probing questions. We start out with 10 percent undecided. But then, after the additional questions, undecided comes down to about 6 percent, with half of those who first identified as undecided coming down for Trump. All of these undecideds go to Trump with other questioning.

In contrast, Biden supporters are not shy at all but are not very enthusiastic.

“There’s no one for Biden who’s not happy to tell you they support him. There’s tremendous openness about support for Biden, though there is low enthusiasm. But among rabidly pro-Trump voters, there are some who are shy about saying they are for him,” Basham added.

“The public, en masse, is not where Democrats and the media are. Trump was on to something hanging tough on law and order in his recent speeches,” Basham added.

As The Express reported:

According to the poll, the concerns over the effects of the protests appear to be boosting Mr Trump’s chances even though his campaign is believed to be flagging.

Given a choice between which phrases identifying their views, 71 percent chose “all lives matter” while 29 percent picked “black lives matter”.

Meanwhile, with statues of presidents and other historic figures being attacked and pulled down across the US, 74 percent said they disapproved of the actions, while 77 percent disagreed with the assertion supported by many Democrat politicians that Mount Rushmore with the faces of four US Presidents carved on it “is racist.”

Other key results from the poll include the following:

Questions posed to undecided voters, and their responses, that revealed the “Shy” Trump Vote, included the following:

The poll also gives the president a 309 to 229 advantage in the Electoral College in the 2020 presidential race.

Basham explained that about one-third of poll respondents–500–were in six battleground states– Florida, Iowa, Michigan, Minnesota, Pennsylvania, and Wisconsin–whose results were grouped together. It’s there where Trump has the four point advantage over Biden. In that subset of the larger national poll, the margin of error is four percent.

“I think Trump is more likely to win Minnesota than Biden is. If Biden loses Minnesota, the thing is over,” Basham added. He explained:

There are three reasons for this. First, 2016 was surprisingly close in Minnesota. Second, the Trump campaign has spent the last two years focusing on Minnesota, something they did not do in the lead up to the 2016 election. Third,  most recently you have the tragedy in Minnesota in which the mainstream Media narrative has portrayed the state as the epicenter of hatred for Trump over racial issues. But it’s also a state where most ordinary folks have a brutally realistic take about what’s going on.

“Even if we’re correct [about Trump winning Minnesota] it’s going to be very close,” Basham concluded.

“This is the second of six monthly polls we are conducting in cooperation with Sunday Express. The results of our first poll in June were very similar to the results of this most recent poll. He was up by one in June and now it’s level,” Basham noted.

The Democracy Institute/Sunday Express poll is not currently listed among polls included in the Real Clear Politics Average of Polls or on 538.com, but Basham is confident in his organization’s polling expertise.

“We’ve done a lot of polling. Most of the polling we’ve done is for business clients. We’ve had a lot of practice with private polls,” he says.

Basham was also critical of the way the mainstream media, and other more established polling firms, appear to use polls in the 2020 campaign cycle to advance a particular narrative rather than to provide insight into actual voting behavior.

“They view [their disastrously wrong electoral college projections in] 2016 as an unhelpful fluke. So long as we’re the outlier, it’s easy for them to do that,” Basham concluded.